Fujitsu's new DX90 S2 storage array claims to be much faster and more expandable than previous Eternus models. In this exclusive review, Dave Mitchell finds out just how fast it really is and whether it's good value or not. 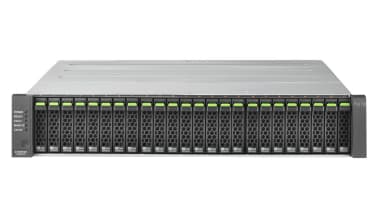 At its foundation, the DX90 S2 uses a 2U head unit with single or dual RAID controllers with the latter run in active/active mode. The hard disk backplanes are now connected over a high-speed PCI Express 2.0 bus and cache memory has been doubled to 8GB of DDR3.

The controller units are available with 12 3.5in or 24 2.5in drive bays and you can pick and choose from 6Gbit/s near-line SAS, SAS and SSDs. Storage expansion has been doubled as nine disk expansion shelves are supported and up to 240 2.5in drives. For interfaces, you can choose from 6Gbit/s SAS, Gigabit or 10-Gigabit Ethernet IP SAN, 8Gbit/s FC and even 10GbE FCoE and mix different types of modules in the same RAID controller. 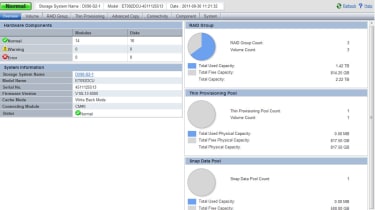 We were supplied with two separate head units each with dual RAID controllers all fitted with two 8Gbit/s FC interfaces. This setup allowed us to look at Fujitsu's new Remote Equivalent Copy (REC) feature which mirrors data between appliances in primary and secondary sites for disaster recovery. Each chassis was also each supplied with four 200GB Stec ZeusIOPS SSDs and twelve 300GB SAS2 SFF hard disks. These are included in the price we've shown making this system very good value.

The web interface has a quick start wizard for creating RAID groups. You can create multiple volumes within an array where each one is assigned a LUN and then mapped to selected interface ports. You can allow unrestricted host access to LUNs or use affinity groups which combine multiple volumes and only permit selected hosts to access them over specific ports.