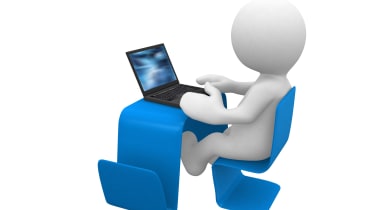 When Google launched its first Chromebooks earlier this year, it received a mixed reaction.

Some saw the devices signalling the future of computer usage in both the consumer and business spheres. Others criticised Google's thin client machine for lacking any native power or storage functions something businesses undoubtedly still desire.

Using thin clients has its positives. Yet if companies want to cut desktop costs, there is another way to do so and empower staff at the same time. How? Have employees use their own machines.

For most businesses, bring your own device makes perfect sense with the right sort of technologies.

The bring your own device' model, or BYOD, should be the future of client computing in the enterprise, merging the business and consumer sides of people's computing. Add desktop virtualisation to the mix and it's a genuinely attractive proposition for IT. And for almost all involved in the market, it makes sense.

Why thin clients aren't the future

But let's start with why thin clients won't kill off PC use in businesses. Dumb terminals are designed to be managed and run over the cloud, be it public or private. The end goal is to provide the user with the ability to work wherever they are, whilst maintaining control over systems for security and management reasons.

But how many workers will be permanently connected to the web? Very few. To truly enable mobile working, offline capabilities are required. With thin clients that's simply not possible and when connectivity goes down, or if login details are compromised or are forgotten, they live up to their name: dumb.

Instead, thin clients only really show their worth in special use cases. For instance, directories company Yell has deployed thin clients in a number of its office buildings simply because some their premises could not cater for 2,000 workers, each with a PC.

"The air conditioning and design meant they had to go thin client," explained Roy Illsley, principle analyst at Ovum. "In certain situations the thin client, where you've got a dense population, call centre-type situation, will be there. But really bring your own device is on the up."

Even Citrix, which has gained much from the rise of thin clients, doesn't see thin clients as the way forward for businesses. The company is really going after certain verticals with its thin client plays, like this week's announcement of HDX on-a-chip.

"We don't see [thin client] as the future," Mark Templeton, Citrix CEO, told IT Pro during the Synergy 2011 event in Barcelona this week.

"We see the future as basically being device ubiquity and infrastructure that is not tied to it, unless there's a reason for it to be Even though we like to push certain types of devices because they give customer solutions, it's not because we believe in one over another."

Like some savvy gambler, Citrix is betting on BYOD. Martin Duursma, vice president of Citrix Labs and chair of the company's CTO Office, believes within five to 10 years, BYOD will be run by 70-80 per cent of organisations.

Uptake of BYOD with desktop virtualisation, which has been fairly minimal so far, is going to soar. That's according to vendors and analysts alike, so you might want to do a Citrix' and put some money on the market too.

"It's the way IT is going," Duursma said. "For most businesses, bring your own device makes perfect sense with the right sort of technologies."

For IT, BYOD brings high levels of control over what workers are doing. Using desktop virtualisation, it solves the security issues around consumerisation by centralising management and splitting devices into two: one half for business, the other for personal use.