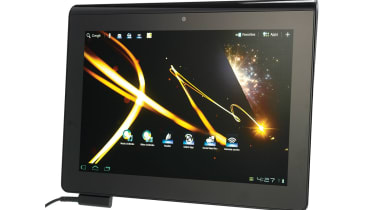 Sony has been rather tardy in coming to the Android tablet market, but its first effort - the Tablet S - is certainly noteworthy for numerous reasons. The slightly wedge-like shape is the first thing you'll notice. The odd shape differentiates it utterly from the ever-popular iPad 2 and Samsung's Galaxy Tab 10.1. It's therefore fairly certain that Sony shouldn't have Apple's lawyers knocking on its door in the near future - as Samsung has suffered repeatedly over recent months. 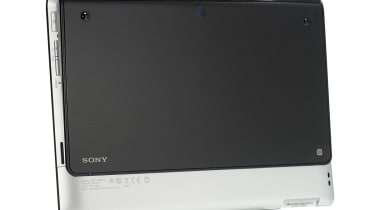 The Sony Tablet S has an unusual design that feels, and looks, like a folded-over magazine.

Aside from patent-proofing the Tablet S, the shape provides a number of more end-user friendly benefits. The chunkier end of the tablet makes it a lot easier to hold if you're touting it about in portrait mode. It feels, and looks, like a folded-over magazine. If you're working on the go, or are on your feet all day at a conference or event, then it's a more ergonomic choice than some of its razor-like competitors.

Speaking of working on the go, the Tablet S we received for review was a Wi-Fi only model, costing 319 ex VAT. An identical model with 3G built-in will go on sale soon, but you'll have to pay 100 more for the privilege of a direct mobile connection, plus the cost of a data contract. A simpler option, as always, is to link your tablet to a smartphone which can act as a wireless hotspot.

There's the usual 802.11n wireless, Bluetooth and GPS built-in. A full-sized SDHC card slot will appeal to those who want to use the Tablet S for reviewing photos taken on a dedicated camera before sending them back to the office. The built-in camera is typical of Android tablets, producing disappointing images, but it's fine for quick snaps if you need to make a visual record. There's another, forward facing camera for video-conferencing. The mini USB port is unusual in that it can act as either host or client, so with the right leads (not supplied) you can copy files directly to or from an attached storage device. There's 16GB of storage in the Tablet S itself, though a Wi-Fi only 32GB model is available for around 383 ex VAT.