The massive HTC Titan is well-named, but does this new Windows Phone 7.5 handset tower above the competition or is it already a dinosaur? Julian Prokaza gets to grips with the behemoth to find out. 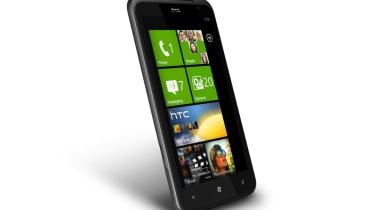 Manufacturers seldom name their smartphones in any meaningful way, but the moniker of the HTC Titan is particularly apt. With a 4.7in screen, this is a model that's almost encroaching into tablet territory and its launch is well timed. Apple's decision to stick with a comparatively modest 3.5in screen for the new iPhone 4S caused many to question its wisdom now that Android smartphone makers are opting for ever larger displays and now HTC is trying the same thing with Windows Phone 7.

Anyone who isn't a professional basketball player will find one-handed use difficult, since there's just no way for an average-size thumb to reach across the whole screen comfortably.

Obviously for a smartphone with a 4.7in screen, the HTC Titan is a bit of a brute, but the matte black finish and slim profile go some way to disguising its epic proportions. It still feels huge in the hand though, and anyone who isn't a professional basketball player will find one-handed use difficult, since there's just no way for an average-size thumb to reach across the whole screen comfortably. There isn't much to fiddle with on the outside of the case, though just slender, lozenge-shaped power, volume and camera shutter release buttons that, ironically, could all do with being a little bigger to make them easier to find with a finger.

The screen fills the whole front of the HTC Titan (which is not to be confused with HTC's older Windows Mobile TyTN, incidentally) and a thin plastic lip raises it off a hard surface by a tiny amount when placed face down. The screen is bright and vibrant, and the capacitive multi-touch works perfectly, but the screen is limited to a resolution of 480 x 800 pixels due to Microsoft's stipulations.

480 x 800 is the same resolution as almost all other Android smartphones, but the Titan's much bigger screen makes its effective pixels-per-inch (ppi) rating correspondingly lower at just 199ppi. This is obviously less than the 330ppi retina' display on the iPhone 4/4S, but it's also lower than the 217ppi of the Samsung Galaxy S II and even the 204ppi of the 320 x 640 iPhone 3GS. So, while it's reasonable to expect a larger display to deliver improved image quality, this isn't quite the case with the HTC Titan as its screen doesn't actually render text anywhere near as crisply as on other smartphones. So much for bigger being better.