Fujitsu's new Primergy TX120 S3 is an entry-level server with a difference. It may look like a standard PC, but Dave Mitchell thinks it's anything but. Read this exclusive review to find out why. 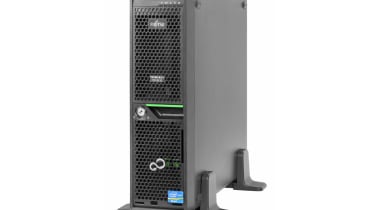 Fujitsu's latest entry-level server is designed specifically for small businesses in small offices, but also for environments such as doctors' practices or public libraries that really value their peace and quiet. The Primergy TX120 S3 sits neatly between a microserver and a standard pedestal server but don't be fooled by its size as it's packing many features that you won't find in your average PC.

This slimline unit can be placed flat on a desk or upright using the pair of solid adjustable vertical stands. Access security is good as the two removable covers at the front can be key locked shut. This blocks all access to the ports, disk drives and power switch as well as the extra expansion bay and also stops the main chassis cover being removed.

Despite its compact dimensions, the TX120 S3 squeezes in a lot of features into a chassis that's less than 10cm thick.

This is one of the first Primergy desktop server models to support Intel's Xeon E3 processor and is available with five different options. The price includes a 3.3GHz E3-1240 chip, but Fujitsu also offers lower cost Pentium G620, Celeron G530 and Core i3 equipped models.

Despite its compact dimensions, the TX120 S3 squeezes in a lot of features into a chassis that's less than 10cm thick. The lower cost model has room for two internal cold-swap 3.5in SATA hard disks, but the review system came supplied with the four-disk 2.5in hot-swap bay option.

The cage supports SATA or SAS hard disks, but must be ordered with the system as it's not a field upgrade. For SATA disks you can cable the backplane directly to the embedded port on the motherboard where the Intel C202 chipset supports mirrors and stripes.

The review system came with a pair of 300GB 6Gbit/s SAS SFF drives and Fujitsu's SAS PCI Express RAID card which adds support for RAID 5 and 6. Even with the RAID card in resident, there's still room for more expansion as there are two spare PCI-E slots and a 32-bit PCI slot.