The Primergy TX140 S1 is one of Fujitsu's first Xeon E3 tower servers and packs plenty of features into its large chassis. Dave Mitchell delves deeper to see if it's a better choice than the latest entry-level servers from Dell and HP. 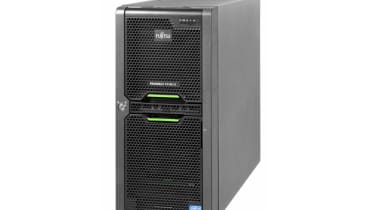 The new Primergy TX140 S1 is part of Fujitsu's entry into the Xeon E3 server market and this pedestal server aims to offer SMBs a solid, general purpose system with a high expansion potential. Typical uses for the TX140 S1 are file, print, mail and database apps and Fujitsu has also pitched it at branch offices looking for a low-cost system to run local services.

The TX140 S1 may be an entry-level server but it's quite a bit larger than HP's ProLiant ML110 G7 and Dell's PowerEdge T110 II. The front and side panels can be locked to block access to the drive bays, ports and expansion slots.

The extra height hasn't been wasted as there's room at the front for three 5.25in devices. The drive cage below can be fitted with a cage for four 3.5in hot-swap disks or a cage for eight 2.5in disks. 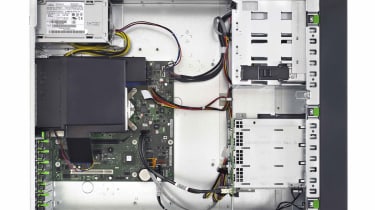 Our review system came with the latter cage populated with three 146GB Seagate 6Gbit/s SAS SFF disks. This puts Fujitsu on a par with HP's ML110 G7 for storage options, but Dell slips behind slightly as the T110 II can can only accommodate six SFF drives - two fewer than the Primergy.

You can start with low-cost SATA LFF disks and the motherboard's Intel C202 chipset has a four-port interface which connects to the drive cage via a single cable. This chipset supports mirrors and stripes, but the review system also had Fujitsu's SAS 6G PCI Express card which adds RAID 5 and 6. It also has a generous 512MB of cache memory and accepts an optional battery backup unit.

Internal chassis design is tidy, although Fujitsu's little D3049 motherboard does look lost inside the vast interior of the case. It's so small because Fujitsu has opted to reduce manufacturing costs for the TX140 S1 by using the same board as the one in its new low-profile TX120 S3 desktop server.