InforTrend's latest high-speed DAS appliance provides a simple method of expanding storage for multiple application servers. In this exclusive review, Dave Mitchell hooks it up to the labs' servers to test performance and see how easy it is to deploy. 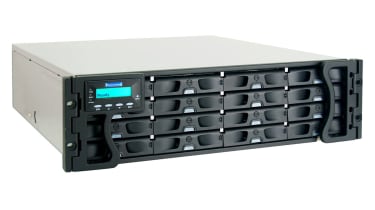 Costs for Fibre Channel (FC) and IP SANs have dropped significantly over the past year, but many SMBs still find them too expensive and prefer to use direct attached storage (DAS) to expand server capacity. Infortrend has traditionally focused on delivering affordable business storage products and its latest EonStor DAS appliances are designed to share the storage wealth with multiple application servers.

On review is the ESDS S16S-R2240-4 which is a 3U system that can accommodate up to sixteen hot-swap LFF hard disks. The price we've shown is for a diskless appliance, but for testing we were provided with a full complement of high performance 600GB 15,000rpm 6Gbit/s SAS disks. Infortrend also offers 10,000rpm SFF hard disks and lower cost 1TB, 2TB and 3TB 7,200rpm nearline SAS drives. 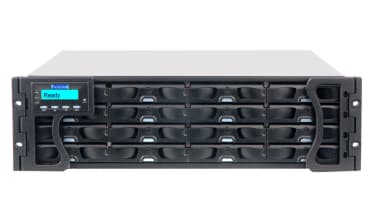 Hardware resilience is good with the review system including a pair of redundant, hot-swap controllers. Each one has four 6Gbit/s SAS host ports so you can link four servers using dual-redundant links for high availability (HA) or eight servers in a non-HA environment.

Each controller is equipped with 2GB cache memory which can be upgraded to 4GB. They each have a battery backup as well as Infortrend's CacheSafe feature which writes all cached data to flash memory for extra protection in the event of a prolonged blackout.

Expansion is very good as each controller has a dedicated 6Gbit/s SAS port for adding either J2000-S or J2000-R expansion shelves, allowing for a maximum of 112 disks. Both are very similar 3U units with dual power supplies and fan modules, but the R' model has four SAS ports allowing the use of multiple fault tolerant paths to the main controller unit.

Each controller has a dedicated network port for web management, although the RAIDWatch browser interface isn't that easy to use and yet is too basic for our liking. Once you've assigned IP addresses to the controllers, it's far better to install the bundled SANWatch application suite which is more sophisticated.