A botnet that is thought to have earned its controllers $14 million is dismantled. 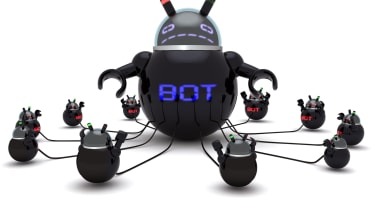 A botnet sitting on more than four million computers has been taken down by the FBI, with six suspects arrested.

Two datacentres in New York and Chicago were raided and over 100 servers taken offline as the botnet's infrastructure was dismantled as part of Operation Ghost Click.

Machines in over 100 countries were infected with the DNS Changer malware, which silently changed systems' DNS settings to point to foreign DNS servers.

This allowed the attackers to point victims to malicious IP addresses when users visited certain domains. When redirected in this way, users are at risk of getting yet more malware on their systems.

The FBI said 500,000 machines in the US were infected, including Government and NASA computers. The malware also prevented anti-virus installation and OS updates.

Six Estonian nationals were arrested under suspicion of running the illegal campaign, whilst another suspect, Russian Andrey Taame, is still at large, the FBI said.

It is believed they monetised the operation by inserting ads onto websites or forcing people to visit certain web pages. The perpetrators would get money for every click on an advertisement, or each time a victim was redirected to a particular site. They were able to acquire $14 million along the way, the FBI said.

In one example included in the FBI indictment, an infected user clicked on a link for the official Apple iTunes website only to be taken to a website unaffiliated with the tech giant and yet purportedly sold its wares.

Trend Micro, which helped supply information to the FBI on DNS Changer, hailed the law enforcement operation as the "biggest cyber criminal takedown in history."

There have been a number of significant botnet takedowns in recent months, including Rustock and Kelihos, both of which were taken apart thanks to collaborative work led by Microsoft.

Ferguson believes the DNS Changer case has shown the war on botnets does not require Microsoft to lead the way.

"The fight against cyber crime and effective cooperation with law enforcement isn't dependent on any one company," Ferguson added. "The whole industry welcomes these kinds of successes."

He revealed Trend is continuing to work with law enforcement on various other cases.

Who was running it?

An Estonian company known as Rove Digital, a seemingly legitimate IT company, was allegedly responsible for controlling the DNS Changer botnet, Trend revealed in a blog post.

Vladimir Tsastsin, one of those arrested by the FBI and who had previously been convicted of credit card fraud in Estonia, was the owner of one of Rove's domain registrar companies called Estdomains, Trend explained.

Another of Rove's companies called Esthost was asked to cease activities in 2008 after many believed it was hosting criminal activities, but it continued to operate. Once Rove recognised law enforcement was on its back, it moved the command and control infrastructure across the world, shifting many of its servers to New York.

"Today, with the flip of a switch, the FBI and our partners dismantled the Rove criminal enterprise," said Janice Fedarcyk, the FBI's New York assistant director in charge.

"Thanks to a coordinated effort of trusted industry partners, a mitigation plan commenced today, beginning with the replacement of rogue DNS servers with clean DNS servers to keep millions online, while providing ISPs the opportunity to coordinate user remediation efforts."

Whilst the rogue DNS servers have been replaced, many may still be infected. Head here to learn about how to check if your system is part of the DNS Changer botnet.