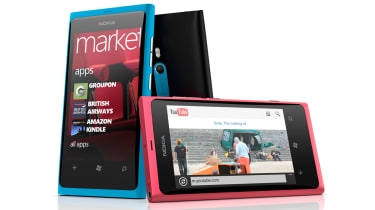 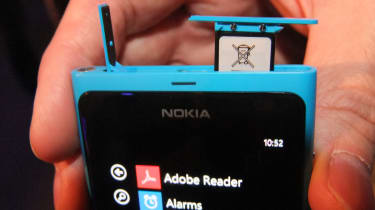 The micro USB2 port and microSIM card slot are protected by clever interlocking covers that take a little figuring out.

The Corning Gorilla glass screen is another striking aspect of the Lumia 800's design. It extends right to the edges of the case and is raised slightly, thanks to the rounded lip on its perimeter and a gentle curve from top to bottom. It's a lovely piece of sleek design and it looks quite stunning, at least with the Lumia turned off.

Turned on, however, and the screen isn't quite so nice. Its 3.7in diagonal certainly makes it a good fit for one-handed use and the capacitive multitouch sensors works under the curved glass work wonderfully well. Its 480 x 800 pixel resolution should make for a sharp image at the size screen too, but this is not the case, thanks to Nokia's decision to use a PenTile matrix display.

Unlike the repeating pattern of red/green/blue (RGB) subpixels used by standard LCD displays, PenTile matrix displays instead use a red/green/blue/green pattern (RGBG). So, despite a PenTile matrix screen sporting an apparent 480 x 800 resolution, it actually contains one third fewer subpixels than the same resolution RGB display, which makes it cheaper to manufacture. It also makes it an inferior display with poorer image quality.

The step-down in quality isn't readily apparent when viewing images and the AMOLED display used on the Lumia 800 is certainly bright and vibrant when it's displaying photos. Unfortunately, the lesser actual pixel count makes it much less adept at displaying text and the Lumia 800 suffers from visible fuzz' that's made all the more obvious by Windows Phone 7's heavy reliance on text for its UI.