The ET1 enterprise tablet from Motorola Solutions is very different from all the other Android tablets available as Alan Lu finds out in our hands-on sneak peek. 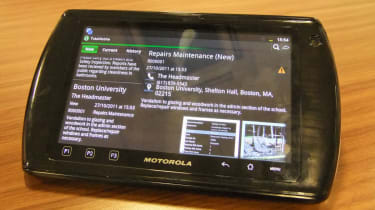 There are now countless tablets available, but very few are aimed at businesses. The ET1 is a tablet designed by Motorola specifically for enterprises. It's not the Motorola you're probably thinking of though the ET1 is from Motorola Solutions, the enterprise communications technology company that split from smartphone maker Motorola Mobility. The latter Motorola is the one most people are familiar with the mobile phone manufacturer being bought by Google.

It's clear just from looking at the ET1 that it's not a typical tablet. The curved black plastic build is chunky and looks heavy, but it weighs a reasonable 630g not much more than the iPad 2. The ET1 should be water and dust resistant with the ability to survive drops of at least 1.1m unscathed. Part of the bulk comes from the optional hand strap which attaches securely to the rear and can be rotated in notches. Although it looks silly at first, the hand strap should make the tablet comfortable to hold for long periods of time. 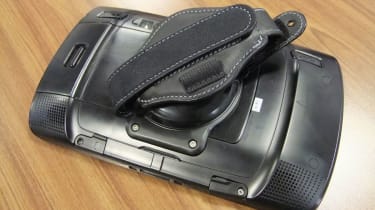 Besides the 7in 1,024x600 pixel screen, 1GHz dual core processor, microHDMI port and eight megapixel rear-facing camera, there are plenty of other, more unusual hardware features. There are three touch-sensitive buttons running along the bottom edge of the screen and a pair of game console-style shoulder buttons all which can be programmed to launch the apps of your choice.

The battery is user-replaceable which should reduce the number of tablets an enterprise would need to keep in stock purely as spares they can just stock spare batteries instead. Motorola estimates a battery life of around five and a half hours when streaming video over WiFi. The microUSB2 port is actually a removable module - Motorola plans to offer optional replacement modules such as a NFC unit and a dedicated barcode reader.

The hardware is backed up by what looks like a comprehensive three year warranty which can be extended with a three year support contract customised to your needs. Motorola even guarantees to keep the ET1 in production for three years so a broken unit can be swapped out with a new, identical one, rather than a different successor unit, within the warranty period.