The future of processors is cloudy – or is it?

AMD is pitching its new Opteron processors as perfect for datacentres responsible for the cloud, but is this nothing more than clever marketing? 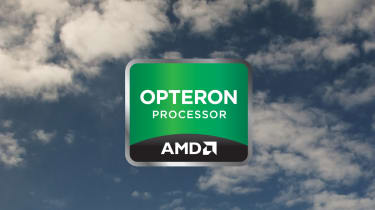 COMMENT AMD has launched its latest range of server processors, the Opteron 6200 and 4200 series chips, otherwise known as Interlagos and Valencia, including a stonking 16-core model.

Naturally, AMD claims its new chips are faster and run cooler than Intel's Xeon processors, but the silicon underdog also claims the new Opterons are perfect for the cloud too - 'Core of the cloud' as AMD's marketing slogan wittily puts it. However, to us it sounds like AMD is jumping on the cloud bandwagon for marketing purposes and the bandwagon is creaking.

AMD's position is fairly straightforward. The new Opterons pack greater processor density into the same amount of rack space as their predecessors without a corresponding increase in power and cooling requirements. Naturally, this sounds perfect for datacentres providing cloud services. Increasing processing power without having to invest in more racks and coolers means you can provide cloud services to more users/customers and potentially pass on the cost savings to those customers.

However, it's worth bearing in mind AMD's somewhat precarious commercial position. Arch-rival Intel has whittled away AMD's market share of the lucrative server processor market just as many of the servers we review on IT Pro have Intel Xeons as AMD Opterons, if not more. The cloud, for better or worse, is the buzzword of the moment and piggybacking on the hype surrounding the cloud is a surefire way to attract attention and market awareness. Both of which are what AMD needs if it's to sell more processors.

But they would also benefit just about every datacentre, whether or not they're providing cloud services we'd be surprised if there were any datacentre managers who wouldn't want increased processing density and energy efficiency. Especially in an era of tightened budgets and higher energy costs.

What would allay our scepticism is some reassurance that Interlagos and Valencia are but the first steps in a long-term plan. AMD was keen to trot out spokespersons from software and OS partners like Red Hat and VMWare at its Munich launch event for Interlagos to show third-party support for the new Opterons. Third-party support can be fickle though, especially if the future is in doubt.

While we wouldn't expect AMD to divulge its entire product road map, some hints as to what role Fusion-style APUs could play in servers would be welcome. Intel may not necessarily be any better at executing ambitious long-term plans when it comes to massively multi-core and APU-style processors (Larrabee anyone?), but AMD may have to worry about ARM which may be on the rise as a serious competitor in the server market.

In short, we don't think pitching its processors as perfect for the cloud is the market share magic bullet AMD is hoping for. We'd love to be proven wrong though if only because competition is good for your business and the technology it uses.