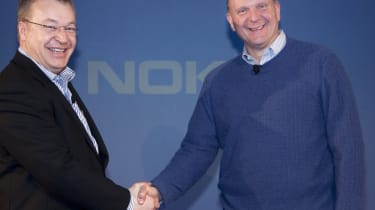 So success in the UK also means that we will generate success in other markets because it has such a large global voice. That's why we are investing heavily, and in a very different way, in our marketing campaign.

We understand there's obviously going to be different market dynamics in the US but it's still operator influenced. The UK is probably more highly competitive in devices. The market is extremely mature and sophisticated and tech-savvy.

Nokia only has one choice and that's for this to be a success so it's all hands on deck to make this happen.

Talking to people at Nokia, it seems like there's a different attitude in the company...

It's amazing what a challenging culture can generate. If you look at where Nokia was 18, 24 months ago, we maybe felt that we could do everything and do it independent of everyone else. That's completely changed and the change has been driven by Stephen Elop.

Things got lost in the corridors of bureaucracy and politics in the past and now that's all been cleared out.

Stephen uses words like accountability and urgency and listening. Listening is a big one. There have been accusations before that we didn't listen and perhaps had we listened, we'd be in a much healthier place.

Things got lost in the corridors of bureaucracy and politics in the past and now that's all been cleared out. Now there's a fast line to the consumer. I'm so excited by some of the things that are coming because I've seen them. We may have lost sight of that as a big, mechanical organisation with so many layers; I think that's all been stripped out.

I've been in Nokia eight years and if you look back at what's happened in the last eight months, since February, it boggles the mind. The old Nokia would certainly not have been able to deliver that. This is a genuine testament to Stephen Elop and what he's brought about.

It's like a hurricane of change. We have Lumia, the 710 and 800, we've two releases of Symbian, we've got the Asha range, we've seven devices that have NFC, six new Symbian devices and all in the space of eight months and we've managed to differentiate Lumia. I said to Stephen if we can do that in eight months, imagine what we can do next year.