An ultraportable ThinkPad for less than £500 seems like a bargain. We dig deeper to find out if there are any catches. 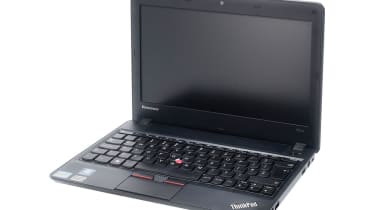 The ThinkPad X121e may not be an ultrabook, but this ultraportable laptop from Lenovo is still light and compact. It weighs just under 1.6kg and, thanks to its compact frame, could easily be mistaken for a netbook. The X121e is far more powerful than any netbook though the Intel Core i3 2357M processor is fast enough for tasks such as image and video editing.

The X121e looks like a smaller version of Lenovo's other ThinkPad laptops with its conservative, plain black design. The only design flourish is the lid's matte, soft-touch texture which feels almost velvety. Despite the low price, the X121e generally feels sturdy, rigid and well-made. The underside of the laptop didn't become uncomfortably warm when churning through our demanding benchmarks.

Like many other ThinkPads, the X121e has both a touchpad and a touchstick. Sadly, both prove frustrating to use. The touchstick feels juddery and laggy which is annoying, while its spongy buttons don't given enough feedback when pressed. The touchpad has its buttons built into the bottom of the pad itself, but the pad feels as if it's loosely affixed. This not only feels poorly made, but it also makes it far too easy to accidentally move the cursor when clicking onscreen buttons and icons. It's unpleasant and very irritating.

Thankfully the keyboard is generally much better. Although it doesn't feel quite as responsive as the keyboards on previous ThinkPads, the keys have enough travel and feedback to make typing fast and typo free. While most keys are as large as those on a standard desktop keyboard, a few are noticeably smaller no doubt due to the X121e's compact chassis. The cursor keys and right-hand side modifier keys, as well as certain punctuation keys including the all-important @ key, are narrower than the rest. The Fn key takes the Control key's usual place which can trip up touch typists initially. Although the keyboard's quirks are easy enough to get used to over time, it's a reminder that that compromises have to be made if you want a compact laptop at a low price.