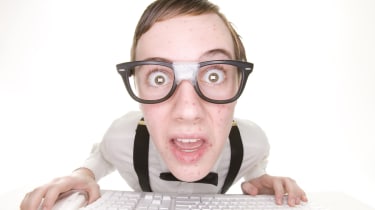 Andrew Corbett, director of the UK IT Association and an IT department worker with more than 25 years of experience, has seen his fair share of broken relationships with workers. In some cases, he found employees refusing to use the name "helpdesk", claiming the "help" prefix didn't apply. "There's quite a lot of antipathy," Corbett says. "There is the feeling that IT is almost like a priesthood, living in an ivory tower far away and you have to go to them on bended knee. The sad thing is that they usually mean well."

What's more depressing is that in the majority of cases, it isn't the fault of either IT or the employees it's the fault of bureaucratic, convoluted, impersonal systems installed by management, which are left to spawn imbroglio after imbroglio rather than be replaced.

One thing workers often fail to grasp is why IT has to say "no" to requests so frequently.

"Take away the complexity," urges Dylan Roberts, chief officer of IT at Leeds City Council. "Tier-one and tier-two support shouldn't be rocket science. Leeds City Council has a really diverse and complex environment in terms of what we're supporting: we've got Novell, Microsoft, Siebel, everything. Support-wise, it could be a bit of a nightmare, but in terms of tier one and two, what most people ring for, there's no excuse for not providing a good operational support service."

As Roberts notes, however, you need people capable of empathy to ensure the IT department isn't fostering contempt itself. "I've been head of IT now for 12 years. When I'm recruiting support people, I don't recruit them for their technical skills, I recruit them for how they get on with people."

One thing workers often fail to grasp is why IT has to say "no" to requests so frequently. When employees ask for a new desktop, or whatever update they feel is critical to their job, IT is bound by the two indomitable forces of budget and time. These two constraints frustrate IT managers just as much as employees, often even more so. When workers are denied, though, it's often assumed IT is either being truculent or incompetent, when neither is true. In most cases, at least.

This problem has been further exacerbated by the quality of technology in the consumer world overtaking that found in most businesses. So-called "super users" expect to have the most current technology handed to them when they want it. In reality, it isn't that simple.

"The demands of the workforce are changing," says Adam Thilthorpe, director of professionalism at BCS.

"Their expectations of what technology does for them in their private life are the same as within the office. It's all very well saying let's put everything on apps, and have our own internal apps shop, for example, but you might have legacy systems that are fundamental to business success."

In companies where workers don't get what they want from IT, they may "go rogue", circumventing the department to satisfy their technological needs. Those shiny Windows 7 laptops working so smoothly at home are much more enjoyable than the clunking Windows XP systems employees are forced to use at work. When they start taking those Windows 7 machines in and out of the office in rebellion, they have no idea of the implications, and little understanding of the risk of infecting the network or leaking intellectual property.

It's something IT gets, but employees don't, only eroding relations even further. In a recent survey from Unisys and IDC, eight out of ten IT leaders cited security as a significant barrier to allowing personal devices in the workplace. Yet four out of ten workers are running business applications on their own machines every day a proportion set to increase dramatically over the next few years.