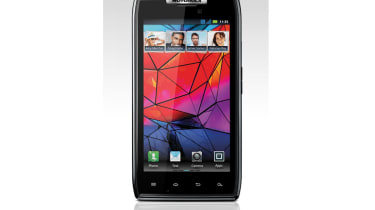 Reduced resolution screen aside, the RAZR is a premium smartphone in every other respect.

The lack of a physical quick-launch/shutter release button for the RAZR's digital camera is a minor annoyance, but the camera app is at least extremely quick to launch. Images are a little washed out and don't contain as much detail as those from other eight-megapixel smartphones, but the camera's macro mode is capable of surprisingly close focus in good light. There is considerable lag if the RAZR hasn't had the opportunity to focus on a subject and adjust exposure before the shutter is released, but do this manually by tapping on the screen and it disappears. The single LED flash is surprisingly capable, too.

Motorola has done little to enhance the barebones Android user interface, but it does bundle a handy little app called Smart Actions. This uses an IF-THEN system for triggering actions based on certain smartphone conditions and it's remarkably capable. For example, Smart Actions make it possible to enable a particular ringer profile when the RAZR detects a geo-fenced location. So it can trigger a recharge reminder if it's late at night, the smartphone is at home' and the battery is below a certain level.