Touchscreen all-in-one PCs don't have to be expensive as Lenovo's new ThinkCentre M71z shows, but is there any point in buying one? Mike Jennings takes a look in our review. 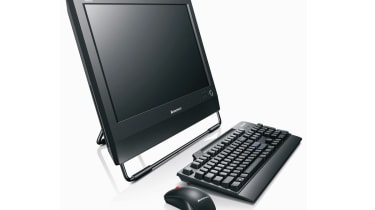 Lenovo is best known for its legendary ThinkPad laptops and range of ThinkStation workstations, but not every business can afford - or needs to - deploy such powerful and well-equipped computers. If you'd like something low-maintenance and a little different, the M71z is a rare business all-in-one with a touchscreen.

It's clear from the start, though, that Lenovo doesn't really know what to do with a touchscreen inside a corporate computer. It's precise and responsive and Lenovo's own software has icons large enough to use with an idle prod. Other areas of the software don't seen to have been optimised for touch control though, and there aren't any of the touch-specific apps - such as note-taking and media tools - that are usually found on consumer touchscreen systems.

It's clear from the start, though, that Lenovo doesn't really know what to do with a touchscreen inside a corporate computer.

The 20in screen itself isn't without issues, either. The 1,600 x 900 pixel native resolution is spacious enough, and colour accuracy is fine. The low brightness level of 210.8cd/m2 results in a screen that's too dim for our liking, and lighter areas also show off slight grain. It's for these reasons as well as the lack of discrete graphics that makes the M71z unsuited for photography work.

The software, meanwhile, is pure Lenovo, with little ground being broken amid traditional ThinkCentre utilities. The ThinkVantage Tools front-end has password storage and protection, a range of tutorials and a trial of Norton Internet Security.

Elsewhere, there's Lenovo's System Health centre, which provides hard disk status and defragmentation options, and the Diagnostics module can run tests and stress benchmarks on the system. The final area allows you to create recovery media should you encounter problems.

The specification under the hood is fine, too. Intel's Core i3-2100 is a dual-core 3.1GHz chip from the lesser end of Intel's range. Its application benchmark score of 61 indicates that it's got enough power to handle typical office applications, although especially intensive tools and graphical work is out of the question - the Intel HD 2000 integrated graphics core will handle HD movies but little else.