Is it a very big phone or a very small tablet? Julian Prokaza takes a look at the unusual Galaxy Note in our review. 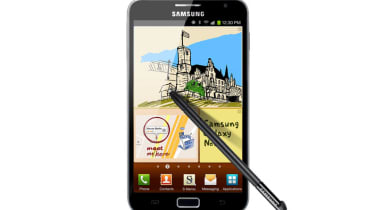 Calls made with the Galaxy Note are clear, but it feels a little odd to hold such a large device to the side of one's face.

The Galaxy Note GT-N7000 has essentially the same internal specification as the Galaxy S II, but its dual-core processor is 200MHz faster. This made it a little quicker in the Quadrant Standard synthetic and SunSpider JavaScript benchmarks, with scores of 3171 and 3167ms, respectively. This makes it roughly comparable in speed to the new Motorola Razr, although that phone was faster in the SunSpider test. The 2500mAh battery has a bigger capacity too, and lasted for a reasonable nine hours in our video playback test with all wireless radios disabled.

At 408 online for a 16GB SIM-unlocked model, the Galaxy Note GT-N7000 is similarly priced to the entry-level 3G iPad 2. That tablet obviously won't fit into a trouser pocket and can't be used for voice calls, but it makes Samsung's oversized smartphone looks like poor value in comparison Apple's better-designed effort works far better as a tablet, too.

Samsung may think it bridges the gap between two different mobile devices, but the Galaxy Note GT-N7000 ends up being neither one thing nor the other as a result. The big screen certainly looks great, but the overall size makes it awkward to use and it’s just not as practical as either a more traditionally proportioned smartphone or tablet.