Enhance Technology's latest IP SAN appliance has value, expansion potential and performance high on its agenda. In this exclusive review Dave Mitchell finds out whether these make up for its basic hardware redundancy. 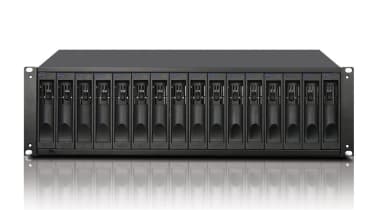 Installation is simple enough as the appliance's tidy web interface provides a quick start option. This offers to set up all the disks and will suggest the optimal RAID array based on the disks installed. For testing, we loaded up four 1TB WD SATA hard disks, took manual control and created a RAID 5 array.

RAID arrays are called volume groups (VGs) and the appliance supports up to eight of them. Within the VGs you create user data volumes (UDVs) which are your iSCSI virtual drives and each VG can contain multiple UDVs of different capacities. 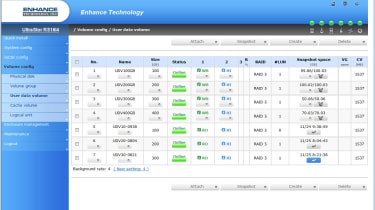 User data volumes (UDVs) are created within VGs and presented as iSCSI targets.

For access control you select a UDV and either make it available to all hosts using a wildcard or enter the full IQN of the host initiators allowed to access it. During this phase you choose a LUN number and can also decide on read-only or read/write privileges.

The controller advertises a single iSCSI node name with all accessible virtual volumes appearing under this as LUNs. This isn't a major issue, but as CHAP authentication is applied at the node level this will apply to all hosts and LUNs.

Snapshots can be taken of a UDV for point-in-time backups and these can be run manually or on scheduled hourly, daily, weekly and monthly intervals. Snapshots can then be used to rollback their associated UDV in the event of a problem.