QNap's latest desktop NAS box is its first to use a Core i3 processor and along with SATA3 disk support, it's 10-Gigabit Ethernet ready and packed with storage features. Read this review to see why Dave Mitchell thinks this is the desktop appliance to beat. 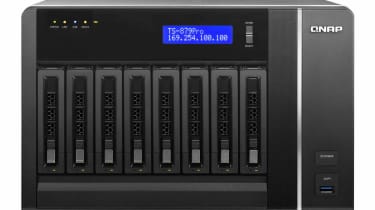 The 10GbE card was identified without any problems and both ports appeared in the Network section ready for configuration. As with the Gigabit Ethernet ports, they support Jumbo frames and can be teamed together for fault tolerant or load balanced links. 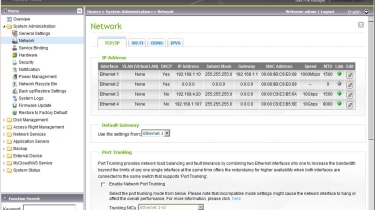 The appliance can be upgraded easily to 10-Gigabit and we had no problems using an Emulex dual-port 10GBase-SR card.

For 10GbE testing we used a dual Opteron 4170 HE Dell PowerEdge R515 server fitted with an Emulex dual-port 10GBase-SR card and all configured for Jumbo frames. With a direct fibre connection to the appliance we saw Iometer return a storming raw read speed of 586MB/s for a mapped share.

This translated to a big boost for drag and drop copies with the same tests now returning average read and write speeds of over 300MB/s. Most businesses will connect the appliance to a switch over 10GbE and use it to link multiple servers over Gigabit Ethernet and the TS-879 Pro looks quite capable of handling these demands.

IP SAN performance is also excellent with a 100GB target delivering a raw read speed of 111MB/s over Gigabit Ethernet with the file copies returning similar rates. Moving over to a 10GbE connection saw Iometer report a read speed of 627MB/s for the same target with copy speeds of up to 575MB/s.