Synology's new rack mount NAS appliance makes the move to a Core i3 processor, is 10-Gigabit Ethernet ready and has dual Infiniband ports giving it massive expansion potential. Dave Mitchell takes the RS3411xs for a high-speed test drive on the lab's 10-Gigabit network. Read this review to see how it fared. 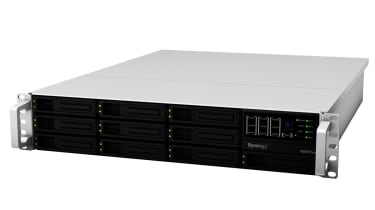 We also had an RX1211 disk shelf to hand, so we connected this to one of the Infiniband ports and loaded it up with three 1TB SATA disks. A soon as we powered the RX1211 up, it appeared up in the Storage Manager interface ready for use. We decided to create a separate RAID-5 array, but you could expand existing arrays using the extra disks if you wished. 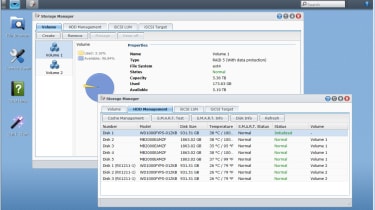 RAID array options are good and we had no problems attaching an RX1211 expansion array using its Infiniband port.

We fitted an Emulex dual-port 10Gbase-SR card in the RS3411xs and connected it to our 10GbE network. We used Dell PowerEdge R515 and Broadberry dual Opteron 4100 rack servers running Windows Server 2008 R2 and equipped with Emulex 10GbE dual-port adapters configured for jumbo frames.

With a direct fibre connection to the appliance we saw Iometer return an impressive raw read speed of 660MB/s for a mapped share on one server. With the second server attached to the other 10GbE port on the appliance and running Iometer on the same mapped share, we saw a cumulative read throughput of 1129MB/s.

These raw speeds translate to fast real world performance as well. Copying a 2.52GB video clip over Gigabit Ethernet returned speeds of 103MB/s and running it over 10GbE saw this increase to 280MB/s. FTP performance was even faster with the FileZilla utility reporting upload speeds of 109MB/s over Gigabit Ethernet and 322MB/s over 10GbE. We also ran the same tests on a share mapped from the array on the RX1211 expansion unit. With both servers running Iometer we saw very similar results showing the Infiniband connection wasn't causing a bottleneck.