Lenovo's Ultrabook has finally arrived, but is the IdeaPad U300S the best Ultrabook yet or just another MacBook Air wannabe? Find out in our review. 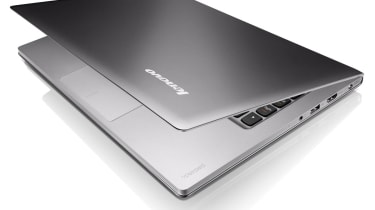 Lenovo has been making budget ultraportable laptops for some time, so were intrigued to see how the famous makers of the ThinkPad would approach the task of designing a laptop based on Intel's Ultrabook guidelines. Interestingly, Lenovo's first Ultrabook, the U300S, has been released under the company's IdeaPad consumer brand rather than the more well-known ThinkPad business brand.

Thankfully, unlike some other Ultrabooks, the U300S isn't yet another MacBook Air look-alike. It has its own distinctive, angular gunmetal grey design. Sadly, an even more distinctive orange version isn't yet available. Although the laptop generally feels sturdy, the whole chassis did flex under pressure more than we'd like. 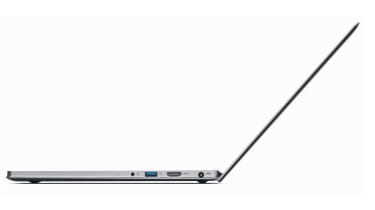 Unlike some other Ultrabooks, the U300S isn't yet another MacBook Air look-alike - it has its own distinctive, angular gunmetal grey design.

One particularly classy touch is the subtle status lights which blend invisibly into the front edge of the chassis when not in use. The U300S doesn't have a tapered design like some of its competitors, but maintains a constant thickness of 15mm instead. It's still very slender and light though at 1.32kg it's the same weight as other 13in Ultrabooks so it's light enough to carry around all day. The power supply, while not as cleverly designed as Apple's magnetic MagSafe power adapters, is still thoughtfully manufactured. It's a slender rectangle that should fit into most overstuffed laptop bags easier than the chunky bricks shipped with some other laptops.

Unlike the Toshiba Portg Z830, the U300S has a L-shaped hinge reducing its height which makes it more comfortable to use in tight spaces such as an economy-class airline seat. However, this also means that unlike the Portg it doesn't have room on its rear for lots of ports. Although it has a USB2 port, a USB3 connector and a full-size HDMI socket, it lacks the SDHC slot and Ethernet port found on the Portg. There's no built-in 3G modem either.

What the U300S lacks in connectivity, it makes up for in battery life. The battery lasted just over eight and a half hours in our light usage test, which is one of the longest scores we've seen yet for any ultra portable laptop. It's beaten by the 13in MacBook Air though which lasted nearly 10 hours.

Sadly, the keyboard isn't backlit for working in dimly lit conditions, but none of the keys are small or in oddly placed positions - refreshingly for a Lenovo laptop, the Ctrl and Fn keys are in their proper places rather than switched round. The keys are comfortable enough to type on quickly and without errors, although they don't have quite as much travel or give quite as much tactile feedback as the best ThinkPad keyboards we've used.