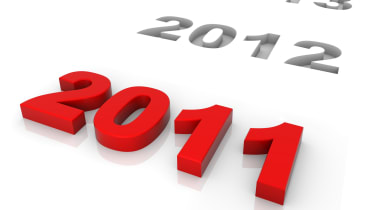 That was something apparently lost on Salesforce.com chief executive Marc Benioff, however, who spent much of his company's Dreamforce event proselytising about how businesses should take inspiration from the Arab Spring. He warned CEOs of a Corporate Spring, where workers might depose their leaders, although didn't seem worried about such an uprising in Salesforce.com.

Whilst having to deal with the Leveson inquiry, strikes, riots and various Vince Cable gaffes, the Government also had to sort out its IT.

The G-Cloud was here, then it wasn't, then it was, then it was kind of there and now it definitely, definitely is real. For whatever reason, HP's MD told IT Pro[i/] the G-Cloud was being killed off, which the Government denied, although refused to use the name G-Cloud. It left us with a cloud strategy as clear as mud, although it appears plans are now finally moving on.

Francis Maude produced the official IT strategy, in which cloud and open source were key. Overall, it received a positive response but given the way in which Government plans tend to go rapidly downhill after they're announced, don't expect the slickest IT to appear in Whitehall anytime soon.

A year wouldn't be complete without some major security scares. There were some massive breaches this year, with Sony and RSA suffering the worst.

After hackers hit the PlayStation Network and other Sony services, over 100 million customers saw their data compromised. The company finally got round to employing a chief information security officer this summer.

RSA had data on one of its security products put in danger after a nasty attack believed to come from a nation state. The SecureID information was later used to hit Government contractors, really proving how big a data breach fallout can be.

Despite the whirlwind of the past 12 months, in the tech world 2011 will be remembered largely as the last year of Steve Jobs' life. It should have been a chance for the community to drop their petty quarrels and look back at the life of one of the industry's most fascinating men. That opportunity was taken by some.

But many chose instead to polemicise, to make myopic claims about Jobs and his work. This was not limited to the anti-Apple brigade either.

That's chiefly why we will miss him. He was the biggest character the tech world has ever seen.

Some labeled the ex-Apple CEO as 'just a great marketer.' Others suggested he was a visionary, the creator of iconic products like the iPhone. Neither was right.

Jobs was evidently more than 'just' something. He was a complex man. Testament to this can be found in the sizable biography released just weeks after his death.

Yes, Jobs was a man who knew fine marketing. Sure, he led the company that produced great technology. But he was also a hugely capable CEO, a ruthless chief, a man who knew to surround himself with immensely talented people, an obsessive, disturbingly competitive, often seemingly heartless, often gloriously rude about competitors, and many, many more things.

That's chiefly why we will miss him. He was the biggest character the tech world has ever seen. And he leaves not just a gaping hole where his big personality once was, but one of the most important legacies left by any businessman in the past 50 years. Goodbye, Steve.