Sony's dual screen Android tablet is distinctive but is it a clever must-have or a gimmick? Kevin Pocock finds out in our review. 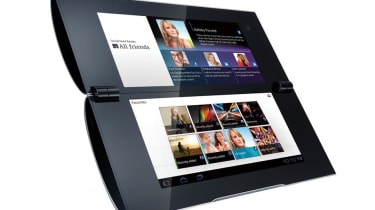 Sony's first Android tablet, the Tablet S, had an unusual wedge shape and was aimed more at consumers with entertainment in mind than business uers. The Tablet P is the company's second effort that seems more focused on portability and bears more than a passing resemblance to a Nintendo DS games console. Sony calls the P's design a "compact dual screen with clamshell" and it's certainly an intriguing aesthetic. 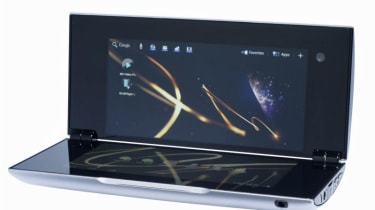 When closed the Tablet P is easily small enough for carrying around in a bag, case or glove box. Since it weighs just 368g it really shouldn't drag you down on the go and it's not too big either, but it is quite thick when closed so it's not exactly pocket friendly. 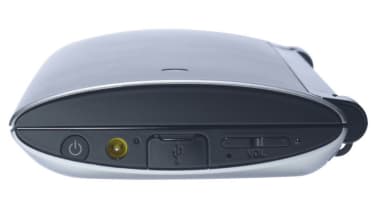 The Sony Tablet P is quite thick when closed, so it's not exactly pocket friendly.

Undoubtedly the biggest talking point is the dual screens that lie within the clamshell. Android Honeycomb 3.2 and Sony's own apps generally make use of the dual screens without issue. For example, when a keyboard is required for typing emails it neatly occupies the lower display although the keyboard isn't quite large enough for touch typing, yet thumb typing isn't quite a viable alternative either due to the thick surrounding bezel. When viewing images in the Gallery app, picture thumbnails occupy the lower display while the selected image is viewed and adjusted on the upper display.

Even Sony's Reader app has a nice trick of flipping ebooks so that each facing page occupies a screen. Unfortunately, as good an idea as this is, the columns of text are slightly too narrow for comfortable reading. The alternative is to stick to the Kindle App which will keep text to either side of the 8mm gap between the screens, although if you rotate the Tablet 90 degrees the Kindle software displays as it would on any other tablet, but with that gap where words should be.