Dedicated graphics cards are the exception, rather than the rule, for most business laptops. Tom Morgan goes hands on with Lenovo's latest ThinkPad Edge, to see if its AMD Radeon GPU is a perfect accompaniment, or more of a third wheel. 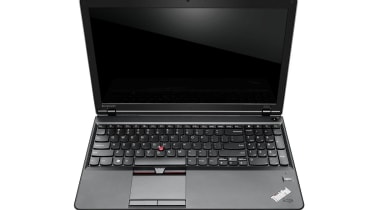 Dedicated graphics cards are the exception, rather than the rule, for most business laptops. Tom Morgan goes hands on with Lenovo's latest ThinkPad Edge, to see if its AMD Radeon GPU is a perfect accompaniment, or more of a third wheel.

With its restrained looks and trademark touch stick, the ThinkPad Edge E520 looks like any other Lenovo laptop. It isn't particularly thin or light, weighing in at 2.4kg and 28mm at its thinnest point, but it has almost everything you could want from an all-purpose laptop, including a 15.6in screen with a matte finish, internal optical drive and a full-size, spill-proof keyboard.

It also has one feature that isn't quite so expected a dedicated AMD graphics card in addition to Intel's integrated GPU. As a consumer card, the Radeon HD 6630m isn't exactly cutting-edge but it can handle hardware-accelerated professional applications such as CAD drawing or 3D rendering where it will perform better than an integrated GPU.

Paired with an Intel Core i5-2410m processor running at 2.3GHz and 4GB of RAM, you should have no trouble running power-hungry applications on the E520. Completing our multimedia benchmarks with an overall score of 49, it coped well with both single- and multi-threaded applications the processor uses Turbo Boost to increase its clock speed to 2.9GHz when some extra power is needed, and has Hyper Threading to double the number of available cores. The graphics card means it's also capable of some light gaming in your down time.

Thankfully, the dedicated graphics card doesn't affect battery life too severely the E520 lasted a very respectable six and a half hours in our light-use battery test. Because it automatically disables the power-hungry Radeon graphics card when on battery power, you should be able to get through most of the day without having to look for a mains socket, as long as you stick to light tasks such as word processing or web browsing. 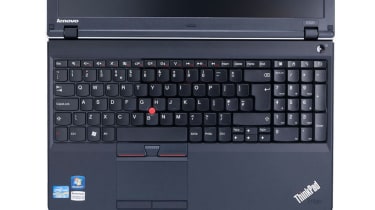 The keyboard is large and comfortable.

When it comes to getting work done, the E520 coped well in an office setting thanks to its quality Chiclet-style keyboard. The full-size keys are fairly close together, but still have enough room that your fingers don't feel cramped when typing. There's even a numerical keypad, and every key has plenty of feedback so you're always certain that your key presses have been registered. Some concessions have been made to fit a full-size keyboard tray into the chassis, most notably the half-height function and arrow keys, but at least the punctuation keys are in the places we would expect to find them.