If you need to connect more than one monitor to a laptop then Matrox's handy video adapter could be the best way to do it as Harry Butler discovers in our review. 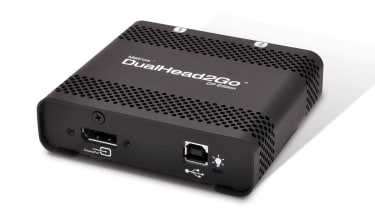 Adding additional displays to PC or laptop can be of great benefit, particularly when it comes to multi-tasking or working with multiple data sources. Sadly, not every PC or laptop comes equipped with the extra display outputs required to make adding an additional monitor as simple as just plugging it in.

Enter Matrox, which has carved itself out niche in providing multi-monitor displays to the output limited. It's DualHead2Go and TripleHead2Go devices have long allowed you to connect multiple monitors to a single video output. The Matrox DualHead2Go DP Edition is the latest iteration and as its name suggests, ditches the ageing VGA connector of its predecessors and replaces it with the increasingly common and significantly more capable DisplayPort.

The unit consists of an unassuming black box, powered via USB and equipped with two DisplayPort outputs and a single DisplayPort input. Connect the input to your video card or laptop's DisplayPort output and the DualHead2Go will be recognised as a single large display, splitting the image over both the DisplayPort outputs. It works right out of the box making setup extremely simple, with no need for drivers to get up and running.

It works right out of the box making setup extremely simple, with no need for drivers to get up and running.

However, while DisplayPort is gaining in popularity, most displays still require a DVI or VGA connection, for which you'll require DisplayPort to-DVI or VGA adapters, which are not included. Happily Matrox does bundle the DualHead2Go with a DisplayPort-to-Mini DisplayPort adapter, so MacBook Pro and similarly high-end laptops are supported out of the box.

With two DVI or DisPlayPort displays connected, the maximum possible resolution stated by Matrox is 3,840 x 1,200 (2x 1,920 x 1,200) pixels, although we found it also supported the slightly higher 16:9 resolution, 4,096 x 1,152. If you use a pair of DisplayPort-to-VGA adapters you'll be capped at 3,360 x 1,050. Even then, the increased screen area is dramatic, particular if you're used to using a 13in or 17in laptop. If that isn't enough for you, it's even possible to pair two DualHead2Go units to enable up to four displays from just two DisplayPort outputs.

If your computer is capable of rendering 3D graphics or displaying high definition video footage then the two monitors will no trouble displaying such content smoothly. This is due to the fact that the DualHead2Go uses your computer's existing video outputs to connect more monitors and not USB, like some cheaper multi-monitor output adapters.

While you are able to use the DualHead2Go as it comes out of the box, Matrox's PowerDesk software significantly improves the user experience. As Windows sees the DualHead2Go as a single large display rather than two additional monitors, maximising a window or opening a new program will see it spread across both displays, leaving you to manually resize or reorient individual windows. PowerDesk allows you to split the single large display into two cells, letting you maximise programs on just one of your two displays, or set a default monitor for new programs to appear on. It's a vital addition and makes using the DualHead2Go just as refined as Windows' standard multi-monitor experience.

The Matrox DualHead2Go DP Edition fulfils its task well, allowing you to easily connect a pair of high-resolution monitors to a single DisplayPort or Mini DisplayPort. However, such products are becoming increasingly redundant for desktop PCs; sub-£100 AMD graphics cards such as the Radeon HD 6670 can also output to three simultaneous displays via AMD’s Eyefinity technology. While DisplayPort is an increasingly popular standard, it’s also still in the minority outside of high-end laptops.

The DualHead2Go does a fine job for users of laptops restricted to a single monitor output and the hefty £170 price tag highlights the fact that there are few similar devices able to meet the same demands to the same high standard. For the rest of us though, the DualHead2Go is too niche and a little too expensive to consider it for its multi-monitor charms.