RIM used the Consumer Electronics Show (CES) in Las Vegas this week to detail the features and functionality users can expect in version two of the PlayBook's software platform. 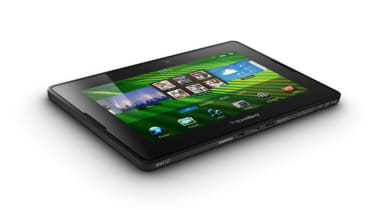 The next version of software running on RIM's PlayBook tablet will give users some of the functionality they've longed for from day one, including native email support.

The BlackBerry maker have attendees at the Consumer Electronics Show (CES), in Las Vegas this week a sneak peek at what is coming when version two of the software is made available next month.

Those using PlayBooks running on the updated software, will be able to access their emails straight from the tablet - thanks to a new, unified inbox - rather than having to pair the device with a BlackBerry handset, as is the case now.

The unified inbox boasts a built-in messaging app that will help users manage their social networking feeds as well as emails, RIM said.

There's also an email management tool that aids search, auto signatures and other features of use to business users and consumers alike.

"With BlackBerry PlayBook OS 2.0 we are building on this strong foundation, as well as leveraging our strengths in communications, social integration and productivity, to allow people to use their BlackBerry PlayBook in new ways throughout the day."

The new software also features an updated version of Documents To Go, including new formula wizards and presentation editing functionality.

RIM has also promised to extend the app catalogue current available for the PlayBook with the launch of the software.

If users do choose to pair their BlackBerry with the PlayBook, under the update, they'll be able to use it as a keyboard and mouse to power their tablet device, making it easier to launch and close applications and execute other commands.