802.11ac routers to hit 800Mbps this year, according to manufacturers. 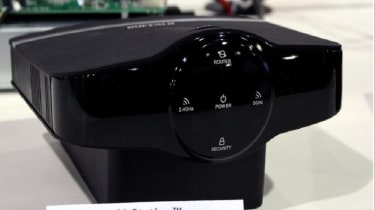 Manufacturers are showing off the next-generation of wireless routers at CES, which they claim will hit actual throughput speeds of around 800Mbps.

The next-generation routers are built on the 802.11ac standard, which is theoretically capable of speeds in excess of 1Gbps. A prototype 802.11ac router on the Buffalo stand was delivering actual throughput of around 800Mbps, which is around five or six times faster than the speeds we've recorded from 802.11n routers.

The 802.11ac standard operates in the 5GHz band, avoiding the congestion found in the 2.4GHz band used by most of today's wireless routers.

However, 802.11ac isn't backwards compatible with 802.11n, meaning router manufacturers will have to build support for both standards into their router products in the short-to-medium term.

The prototype AirStation WZR-1750H router being demonstrated on Buffalo's stand was using a triple antenna set-up to achieve the 800Mbps speeds. The company claims it will be targeted at home users who wish to stream HD content around the house, and for wireless backup.

Buffalo is aiming to release the router in the third quarter of this year, although the 802.11ac standard is unlikely to be finalised before 2013.

Other manufacturers, including D-Link, are also planning to launch routers based on the draft 802.11ac specification this year.