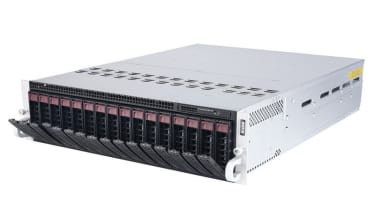 In the world of cloud computing, rack density is king. Yet it's surprising how slow some of the blue chip server vendors have been to catch on.

Indeed, only Dell has shown any initiative in this area, as we saw in our exclusive review of its PowerEdge C6100 cloud server. HP, IBM and Fujitsu have so far failed to deliver anything to match it.

Boston's storage options are superior to Dell as the embedded SATA controller in the C6100 doesn't support any RAID arrays.

Supermicro, on the other hand, has been an innovator in this field and has been designing and building multi-node servers for many years. In this review we take a closer look at Boston's latest Quattro 1332-T which shows off Supermicro's MicroCloud initiative and also takes advantage of the Xeon E3 processor which Intel has aimed firmly at microserver applications.

This isn't Boston's first microserver as its Green Power 2200-T delivered eight server nodes in a 2U chassis. It was certainly innovative but it actually had four nodes each with two integrated servers and its Intel's Atom processors and a maximum of 4GB of memory per node limited it to running low-demand business apps.

Standing at 1U higher, the Quattro 1332-T also delivers eight server nodes but each one is totally independent. Support for the full range of Xeon E3 processors makes it better suited to heavier loads than the 2200-T and each node can handle a lot more memory.

The chassis has two hot-swap 1620W 80 Gold Plus certified power supplies which mate with the hard disk backplane at the front via an edge connector card. At the front are 16 hot-swap drive bays and these are divided equally amongst the nodes so each one gets the two drives in front of it.

The node motherboard also has an integral edge connector which plugs directly into the backplane where it receives power and allotted storage. The boards have two 6Gbps SATA III interfaces, their C204 chipset supports mirrors and stripes and the price we've shown includes a full house of 1TB WD Enterprise SATA III drives.

Boston's storage options are superior to Dell as the embedded SATA controller in the C6100 doesn't support any RAID arrays. If you want this, you'll need to upgrade each node with Dell's 6Gbps SAS/SATA mezzanine modules or an optional LSI MegaRAID card.

Virtualisation is on Boston's agenda as the nodes have an internal USB port and a USB pin header for booting into an embedded hypervisor. There's also an embedded SATA II port with a power header next to it so you can boot the node from a SATA DOM.

The nodes pack in plenty of features with their Xeon E3 processors mounted with solid passive heatsinks and the four attendant DIMM sockets supporting up to 32GB of memory. A small riser card behind the memory sockets presents two Gigabit ports at the rear and opposite this is a PCI-e expansion riser for a half-height, half-length card.

For local access each node has a KVM port and the supplied expansion cable provides VGA, serial and dual USB ports. A single button at the front can be used to turn on all nodes together and they each have their own power button at the back for local control.

All cooling is handled by four large hot-swap fans located between the nodes and the backplane which can be accessed easily by removing a small panel in the lid. Power wastage is kept to a minimum as each fan looks after the two nodes directly behind it and if they're both off the fan spins down as well.

Power is now a major issue in rack dense server rooms and the 1332-T proved to be undemanding. As a baseline we measured the chassis with all nodes turned off consuming only 15W.

With one node powered up we measured usage with Windows Server 2008 R2 in idle settling at 102W. Running the SiSoft Sandra benchmarking app saw consumption peak at 138W. We then powered up more nodes and took idle and peak measurements along the way.

In idle we saw two, four and eight nodes draw a total of 128W, 154W and 222W and under pressure these figures peaked at 182W, 289W and 512W. These are very respectable figure which equate to an average power draw per node of only 28W in idle and 64W under heavy load.

Remote management is an essential ingredient for a microserver and each node has an embedded RMM and a dedicated Fast Ethernet port. It provides a basic but functional browser interface and full access to power for remotely switching the node on or off, resetting it and performing an orderly shutdown of the OS. As we observed on our C6100 review, Dell uses a similar remote management controller so its features are pretty much identical.

To run our combined power tests we needed full KVM-over-IP remote control to all nodes and we were pleased to find this comes as standard. You also get virtual media services for presenting devices on the host PC to the node under control as remote storage and boot media.

Boston's latest Quattro 1332-T delivers a rack density that looks quite capable of giving blade servers a good run for the money. Data centres will approve of its low power consumption and with each node costing less than 1,000 each, it's good value as well.

Boston’s Quattro 1332-T puts up some stiff competition to Dell’s C-Series cloud systems and looks a lot better value than blade servers for businesses that want a good balance between cost and processing density.

The server has an innovative design, its remote management features match those of Dell’s C6100 and it’s highly energy efficient as well making it a fine choice as a cloud computing platform.

Eight hot-swap server nodes each with the following: