Does 2012 spell doom and gloom for the tech sector?

Are we heading for another recession? Is it going to be an even tougher year in the tech market? Simon Brew takes a look… 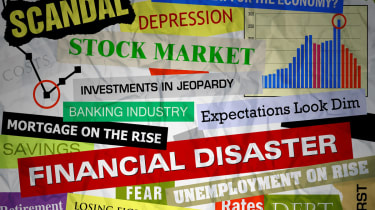 You don't need us to fill you with dire warnings of just how unpleasant the UK's financial climate is likely to be in the months ahead. It seems compulsory, if you're publishing a serious newspaper, to sternly stroke your chin and warn of an absence of cash just around the corner on a regular basis.

But is the IT sector immune to this, or is 2012 set to spell more misery for firms that have only just scrambled back to life after the financial meltdown of 2008? Let's take a look.

How bad it got

The base facts are well known. The UK economy is teetering on the edge of a double-dip recession. Zero growth, or worse, has been predicted. Green shoots of recovery? It's as if they've been sprayed with weed killer.

Retail in general got through December courtesy of good weather and aggressive price cuts, albeit with margins further squeezed. Online retailers fared a lot better, but, as Shopnow retail expert Ellen Flood commented, "Trading statements being released by the high street giants are mixed, while some stores who managed to limp into the new year have already faced administration". The Christmas period, which was supposed to lift businesses out of a rut, didn't have quite the desired effect.

But is the story quite so gloomy in IT? Believe figures from Gartner, and the answer's very much no. The firm's Worldwide IT Spending Forecast predicted that global IT spending would rise by 4.8% to $2,058bn this year, with growth of more than 6% every subsequent year through to 2015. Those figures excluded telecoms services, too, which themselves will enjoy modest further growth.