Accessing a Mac or Windows PC remotely using an iOS device has always been easy, but it’s never been this cheap. Since an update last December, LogMeIn for iOS doesn’t cost a penny, so Julian Prokaza finds out if this free app is worth swiping.

As long as there's sufficient bandwidth, control of the remote computer is smooth, although the LogMeIn app will automatically compensate for slow connections and, if necessary, reduce the Desktop colour-depth to speed things up. The resolution of the remote Desktop can be manually altered, too it's much quicker to transmit 800 x 600 pixels over an internet connection than 1600 x 1200.

As long as there's sufficient bandwidth, control of the remote computer is smooth, although the LogMeIn app will automatically compensate for slow connections.Its large screen makes remote mouse control much easier on the iPad than an iPhone. By default, a mouse icon and pointer is overlaid on the remote Desktop and dragging this around with a fingertip has the usual effect, as do the two buttons on the mouse icon.

The Desktop can zoomed and moved around with the usual multi-touch gestures, but there's no option to make the mouse pointer appear under a fingertip if it's currently off-screen on a different part of the zoomed-in Desktop (although it can be recalled by a careful left mouse-click). 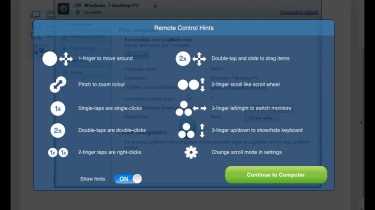 On an iPhone (and optionally on an iPad), the remote Desktop can be set to pan around under a swiping fingertip and the mouse button kept dead-centre, or to move in semi-conjunction with the mouse pointer, depending on the degree of Desktop zoom and the pointer's on-screen position. This latter option easier tried than explained, but it's disorientating and takes some getting used to, so it's hard to imagine a circumstance where it would be useful. 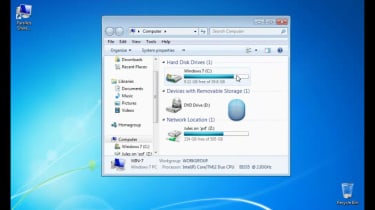 The usual iOS keyboard can be called up on demand by tapping a button on a toolbar that runs across the bottom of the LogMeIn remote Desktop screen. This also has additional buttons for Ctrl, Alt and Apple Cmd keys, and can also be switched to display cursor, Function and other PC-specific keys with another button tap.

How well LogMeIn's remote control works obviously depends on the quality of the broadband internet connection, but while we had no problems with mouse control, we did get the occasional dropped letter when typing into a remote application.