Accessing a Mac or Windows PC remotely using an iOS device has always been easy, but it’s never been this cheap. Since an update last December, LogMeIn for iOS doesn’t cost a penny, so Julian Prokaza finds out if this free app is worth swiping.

LogMeIn Free works as a demo of the 70 LogMeIn Ignition for 30 days, after which such features as drag-and-drop file transfers either from device to device, or via one of a number of cloud storage services, if subscribed to and the ability to browse the remote computer's file system using an iOS-friendly interface are disabled. 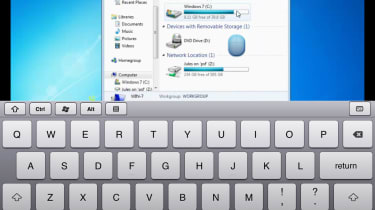 Losing these features is more hindrance than huge inconvenience, though files can always transferred via email attachment on the remote computer, else dragged into a Dropbox or other cloud sync service folder for subsequent access. There's no similarly sneaky workaround for the loss of Ignition's option to stream HD video from the remote computer to an iOS device, but such a feature is hardly a must-have for most people in the first place.

Security measuresEven more mystifying is why the extremely functional LogMeIn is being given away for nothing, but we're not complainingLogMeIn sends a message to the email address used to register an account whenever a remote computer is registered for use with the service and when there's a failed login attempt.

Other security features are limited to a time-out on remote access sessions (useful for an iOS device left unattended mid-session) and the option to not save LogMeIn and remote computer login details between app uses. Enabling an iOS password and user account password on the remote computer is a good idea, too.

Given that LogMeIn Ignition only provides a handful of extra remote access features, most of which won't be missed by most iOS users, we're a little mystified why the price went up from 20.99 to 69.99 with the most recent update last December.

Even more mystifying is why the extremely functional LogMeIn is being given away for nothing, but we're not complaining it's powerful tool that makes an iOS device even more versatile.

The iPad is more than capable of replacing a laptop for many mobile users, but LogMeIn Free for iOS is ideal for those times when access to a Windows or Mac OS computer is still required. Better still, this free version does almost everything the paid-for version does.