Noise levels may not be so important in a dedicated server room, but poorly calibrated fans can waste an awful lot of power. The fact that the RX600 S6's chassis design allows its fans to run more slowly will have a positive impact on overall consumption.

The RX600 S6's chassis design allows its fans to run more slowly, which will have a positive impact on overall power consumption.Our tests confirmed this too, and the system proved to be very frugal when up and running. Even with all four hot-plug 850W supplies included, we measured the server with Windows Server 2008 R2 in idle pulling 427W. 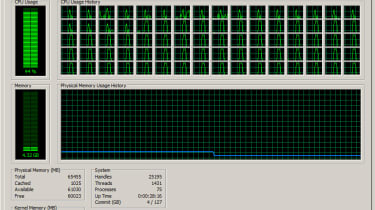 The quartet of 10-core Xeon E7-4850 processors in the review system provide an impressive 80 logical cores.

The RX600 S6's storage options are not as good as the R910, though. Dell offers this particular server with four-bay or 16-bay SFF options, while the RX600 S6 only has room for up to eight hot-swap SFF drives. Fujitsu does at least offer offers a choice of SATA, 6Gbit/s SAS and SSD storage, though.

The RX600 S6's motherboard supports up to two optional UFMs (USB Flash modules) that plug into proprietary slots and can be used to boot the server into a hypervisor. However, Dell goes one better in this department and its R910 has a dual SD Card controller that automatically keeps a backup of the primary boot media.