Will someone rid me of these troublesome Macs?

Inside the Enterprise: Apple now sells more PCs than HP or Dell. It is time IT departments dropped their opposition to the Mac? 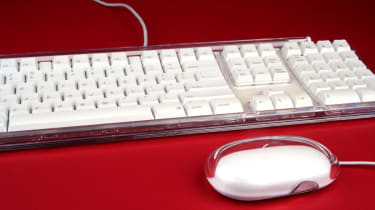 Apple is now the world's leading PC maker, according to figures from market research firm Canalys.

In the last quarter of 2011, Apple sold five million Macs. More significantly, the company also shipped 15 million iPads. This put the company ahead of HP, which recently dropped its webOS based tablets, as well as vendors such as Dell and Lenovo.

This, Canalys says, gives Apple 17 per cent of the "client PC" market a far cry from the times when Apple was lucky to muster a five per cent market share.

Apple's machines, though, have been gaining ground steadily for some years now. The so-called "halo" effect, where buyers of other Apple devices also buy Macs, certainly seems to have worked. First the iPod and now the iPhone have brought consumers to Apple. And Apple has not done badly by selling them additional kit.

There is more to Apple's renewed strength in the PC market than overspill from iPhone sales. A surprising number of knowledge workers appear happy to pay personally - for a Mac, especially a MacBook Air, in preference to their grey, corporate-issue PC. This is despite the fact that Apple's cheapest portable costs more than twice as much as a "basic" Windows laptop.

As well as the "bring your own device" trend, Apple benefits from strong sales to consumers buying a home machine that they might, or might not, also use for work.

Apple's products still have shelf appeal way in excess of most rivals, helped by the way Apple's dealers separate out Macs from the common PC herd. Then there is the effect of Apple's own retail stores. Yes, they are too often full of kids using the free internet to visit Facebook, but they certainly do not hurt the Apple brand.

But Canalys identifies another trend that favours Apple: the switch from laptops to tablets, especially at the low end. In many ways, the iPad is now Apple's entry level portable PC. Canalys says this is especially marked at the lower end of the Windows market, where netbook buyers are switching to iPad or Android tablets.

Some might argue that it is a mathematical sleight of hand to bundle together tablet and PC sales, but it increasingly represents the way we use technology. For a lot of tasks, a tablet is now a pretty good choice. And their low weight and long battery life answer many a mobile worker's complaints about their laptops. After all, you don't often use half a dozen USB ports whist cramped up on a train or airline seat.

None the less, some IT departments and professionals still seem to resist staff using tablets, and Apple devices of any type. Sometimes, Apple does display an ambivalent attitude to the enterprise (the scrapping of the Xserve is one example). But sometimes, it seems that IT professionals oppose Apple kit exactly because it is easy to use, and needs little support.

That is short sighted. Increasingly, business computing is not about operating systems or hardware but data, and most importantly, information. Apple may be in vogue today, but other options, including Android or Google's Chrome will also challenge Windows' dominance. If IT can be flexible enough to support Macs today, it will be better placed to deal with those challenges tomorrow.