Broadberry offers SMBs an affordable blade server with some unusual storage features and a sharp focus on virtualisation. In this exclusive review, Dave Mitchell takes a closer look at Intel’s Modular Server and tests its VM live migration feature. 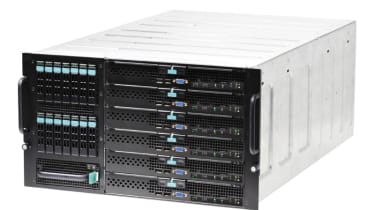 Virtualisation management is enabled with an activation key and Intel has plumped for the open-source KVM (Kernel-based Virtual Machine) software. This is classed as a hosted hypervisor', since it runs in Linux.

Virtualisation setup is nicely automated simply select the Virtualize option next to a compute module and wait it to be preparedConsidering it only costs 495 per chassis to activate, KVM provides a goodly range of features. Up to 256 virtual CPUs per compute module are supported (up to eight per VM) with up to four virtual NICs.

Virtualisation setup is nicely automated simply select a compute module, select the "Virtualize" option in the menu alongside it and wait for the module to be prepared. A VM storage pool can be created and assigned while this is in progress, but note that a minimum of four SAS drives or SSDs are required and dual active/active storage controller modules are not yet supported.

This set-up process also creates a Cluster Share storage area for copying ISO images to and, when defining VMs, these can then be used for boot purposes. 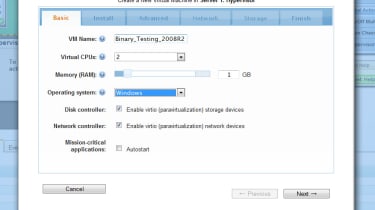 Once the modules have been virtualised, a wizard helps create your VMs.

KVM's live migration feature also allows a VM to be moved from one compute module to another, without any downtime. The migration process is simple just drag and drop the VM icon from one module to the other in the Modular Server Control interface and there are two options. 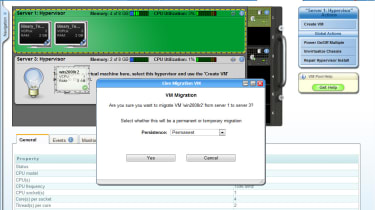 VM Live Migration is a simple drag and drop manoeuvre which worked perfectly during testing.

We tested KVM's migration feature by creating a VM hosting Windows Server 2008 R2 on one module and left a second virtualised module running with no VMs set up. Prior to running a temporary migration, we opened a remote desktop (RDP) session and pinged the VM from another system.

The temporary migration took less than 30 seconds and at no time did we lose contact with the hosted OS. We then ran a permanent migration that took 50 seconds, also with no interruption to services.

The main competitor for the Modular Server is the HP BladeSystem c3000 and Intel is a clear winner on price. The lack of support for 6Gbit/s SAS speeds and 10Gbit Ethernet switch blades are drawbacks, but the new virtualisation features are good value, easy to use and make the server even more flexible.

Broadberry’s Intel Modular Server is more cost-effective than HP’s C3000 and just as easy to deploy. Its internal SAN allows all server blades to be diskless, although the controller still only supports 3Gbit/s speeds. The virtualisation option is excellent value and its live migration worked seamlessly during testing, but bear in mind that support for dual storage controllers has yet to be implemented.