GoToMyPC for iOS is a remote-access tool for controlling Windows or Mac computers from afar, but is it worth a monthly subscription fee in the face of free alternatives? Scott Colvey taps in to find out. 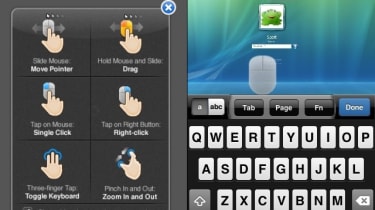 Remote sessions can be triggered over local networks, Wi-Fi or even 3G connections. Responsiveness is obviously dependent on the particular connection but we found GoToMyPC to be a good performer.

Once logged in, you'll find a remote-access app that's largely indistinguishable from its main rival. To wit, once computers are registered via the client application, they appear in a My Computers list and a remote connection is established with a tap and the aforementioned access code.

From there, control is straightforward and very similar to LogMeIn for iOS. The remote computer's whole Desktop might just about cram onto an iPad's display, but much of the time you'll find yourself using the iOS multi-touch gestures single-finger swipes and two-finger pinches to scroll and zoom in and out.

The remote computer's pointer is controlled by dragging a mouse icon around the iOS device's screen, and a tap on the icon's left or right buttons performs the equivalent button press at the remote end. GoToMyPC lacks LogMeIn's gun sight-style input option where the remote desktop instead pans below a centred pointer, but this isn't a significant loss.

Besides, GoToMyPC makes up for this with a better navigational aide. When controlling a computer with more than one monitor connected, the app always displays the entire extended Desktop in one expanse that can be seamlessly scrolled and zoomed.

By contrast, LogMeIn users wanting to control a remote computer with multiple monitors must make three-fingered screen-switching gestures, which is both time-consuming and not as intuitive. 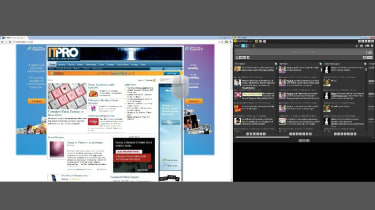