LibreOffice 3.5 doesn't capitalise on new features found in the latest version of certain operating systems either, but these are more of an annoyance than a serious omission. There are no Jump Lists for applications pinned to the Taskbar in Windows 7, for example, and the OS X suite doesn't support Lion's disappearing scroll bars, its full-screen mode, or three-fingered tap on the trackpad to look up words in the dictionary.

The Windows version is also now available as an MSI file download for the first time too, which will makes its incorporation into automated installations much easier than with the old EXE installer.

Writer, LibreOffice's word processor, has long been an adequate alternative for Microsoft Word in terms of core function, but earlier versions had a few rough edges when it came to certain less-essential features. Some of these have been polished for v3.5, but Writer is still weak in certain areas.

For example, while the addition of a (long overdue) live word count is welcome, the fact that it's only visible in a relatively large dialog box rather than the window's status bar rather limits is usefulness. 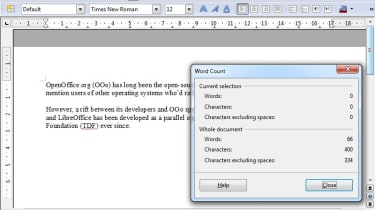 Writer's new live word count is welcome, but the it is inly visible in a pop-up window that hides the document being edited.

Similarly, the grammar checker has also been improved, but it still doesn't catch as many potential errors as Word and its checks aren't as thorough. For example, Writer ignored the use of "not not" in a document that, although a grammatically acceptable (if somewhat questionable) double negative, was actually just a typo that Word did correctly identify.

Writer's Word document compatibility has also been tightened up, or at least its DOCX filter has. Certain Word documents still cause problems though, and while ones with embedded images, footnotes and other simple formatting are opened without issue, ones with watermarks, WordArt objects and other Word-specific features do not.

Header and footer handling has also been refined, and these can now be edited simply by clicking the appropriate part of the document previous versions of Writer required a header or footer to be created using the Insert menu, first. 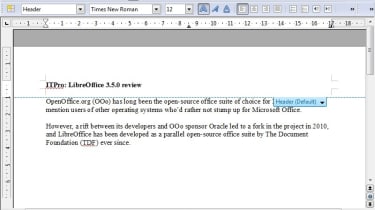 Header and footer editing in Writer is much improved and these can now be edited directly on the page, like in Microsoft Word.