The Calc spreadsheet has always been a more rounded replacement for Excel than Writer has been for Word, and most of the changes introduced with v3.3 simply expand its usefulness rather than address shortcomings.

The most immediately obvious of these are the button next to the input bar that expands it from one line to six, giving much more room to edit complex formulas that won't otherwise fit neatly into a cell. 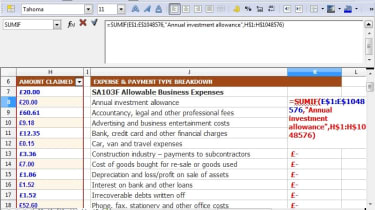 Calc's optional six-line input bar makes it much easier to work with cells containing lots of text or long formulas.

Filter handling has also been streamlined and it's now possible to select multiple values when filtering data in a sheet, rather than just one. 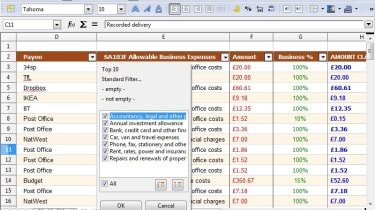 Filter handling is much improved in calc and data can now be filtered by two or more values.

Excel document compatibility has never been a serious issue, but Calc does handle some things in a slightly different way and these may throw confirmed Excel users for a six initially.

For example, whole row or column references in a Formula, such as SUM(E:E), are not recognised in Calc and will generate an error if used. Any instances in imported Excel documents are appropriately converted though, and instead take the form SUM(E1:E1048576).