Impress still lags some way behind PowerPoint when it comes to creating slick presentations and they're fewer top line usability improvements than Writer or Calc in this release of LibreOffice.

PowerPoint presentations that opened with slide formatting glitches in Impress v3.4 caused no problem in v3.5 though, but there are still some outstanding issues. For example, presenter comments added to PowerPoint slides were rendered as illegible 'notes' in Impress 3.4, but they don't appear at all in v3.5.

Support for PowerPoint documents with SmartArt has improved considerably though (i.e. it now works), but objects don't render in quite the same way. For example, PowerPoint's smooth, graduated fills, bevelled 3D edges and drop shadows are not reproduced in an imported presentation, but the basic structure of the object is still preserved. 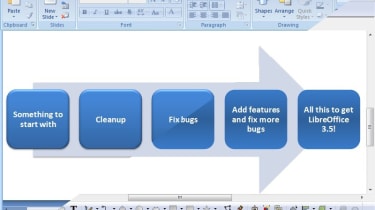 LibreOffice still lacks an open source equivalent to Visio, but the Draw vector-editing application can now at least open and display Visio documents accurately. The Base database just gets bug fixes and a beta PostgreSQL native driver in this release, though.

LibreOffice already had the edge over OOo with its initial v3.3 release in late 2010 and this new version certainly lengthens that lead OpenOffice.org hasn't seen any stable updates in the mean time, after all.

Despite TDF's claim of this being "the best free office suite ever", this release candidate of LibreOffice 3.5 still has more than its fair share of rough edges. That said, none are particularly serious and hopefully TDF's obvious commitment to the project means they will be smoothed out in very short order.

TDF’s rapid pace of development over the last year or so has swept away any concerns about the future of this forked OpenOffice.org project and while it still isn’t in the same league as Microsoft Office, it is still a very solid open source alternative for most users — or at least will be once v3.5 reaches a stable state.