With mobile versions of OneNote now available for both Android and iPad, tablet users have an easy way to access their desktop notes and clippings when on the move. As Julian Prokaza discovers though, one of these apps is not like the other. 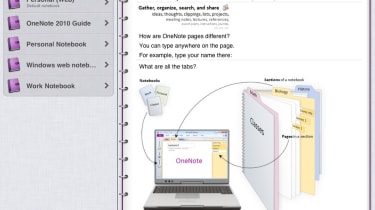 Android and iOS users already have a solid option for syncing notes and clippings between a desktop device and a tablet, but anyone with a finely tuned Microsoft OneNote set-up probably isn't too eager to migrate to an app like Evernote solely for that purpose.

As of December last year, however, iPad owners no longer had to and, with the launch of OneNote for Android earlier this month, the majority of tablet owners can now keep their desktop content in sync with Microsoft's software

Microsoft OneNote is free for both Android and Apple iOS, but only for creating and syncing up to 500 notes. Adding more requires an in-app upgrade and Android users certainly get the better deal here its upgrade costs 2.99, compared to iOS's 10.49.

Either app can be used on its respective tablet as a somewhat limited standalone mobile version of OneNote, but it really comes into its own when synced with a desktop via Microsoft SkyDrive. Syncing is only possible with OneNote 2010 though, and a free Windows Live ID account is also required.

Sharing an existing OneNote for Windows notebook with the Android or iOS app over the web is no different to sharing one with other desktop users just select the "Share This Notebook" option from the application's Share tab, select the "Web" share option, click the "Share Notebook" button and provide a Windows Live ID. 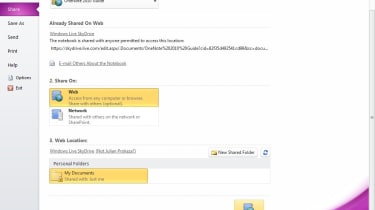 Windows notebooks synced via Live.com in this way will then be automatically appear in the tablet app once it is signed into the same Windows Live ID account.