A year after the hack on RSA, Art Coviello says the entire security industry has been going through 'hell.' 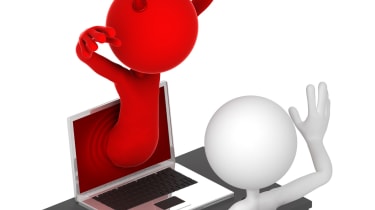 RSA chairman Art Coviello opened his company's premier conference today by saying security providers have been "going through hell in the last 12 months."

Coviello was in boisterous mood during the RSA 2012 keynote as he took to the stage a year after the successful hack of his own business, saying the industry was facing some "harsh realities."

"Never have so many security firms been attacked directly," Coviello said.

"An attack on one of us is an attack on all of us, but together we can all learn from these experiences and emerge from this hell, smarter and stronger than we were before.

"As Winston Churchill once said, if you're going through hell keep going... We must fight back the only way we know how, through creativity and innovation."

Coviello issued a rallying call for the industry to produce different kinds of technologies, insisting vendors needed to move away from the old, perimeter-focused mentality.

The industry should focus on creating technologies that leverage big data to gather information on threats to then counter them, he said.

The end point protections of old are not good enough, nor are they flexible enough, the RSA chairman added.

"Today's systems are a patchwork of controls... serving up far too much data and not enough intelligence," he said.

Earlier today, RSA moved to align itself with a security start up that is pushing such innovation and moving away from the classic signature-based models.

The deal with Zscaler will see the two selling a product that combines the agent-less, cloud-based model of the start up with RSA's well-known authentication services.