VeryPC aims to impress business users and look after the environment, but can it manage both with its new Broadleaf compact desktop? Mike Jennings finds out. 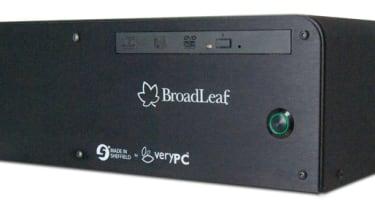 Even so, the Broadleaf isn't without issues when it comes to expansion. First, the SSD is held in a drive caddy and is difficult to extract without first removing the motherboard.

Second, the optical drive is held in a similar caddy that extends from the front to the back of the chassis, limiting access to the motherboard beneath. 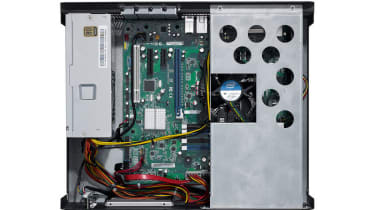 The standard screws at its rear end are easy enough to undo, but the caddy is also attached to the chassis behind the PC's front panel and the hex bolts that hold this in place must be removed before the caddy can be. Finally, the optical drive caddy also hinders access to the low-profile stock Intel CPU cooler, which means more chassis dismantling is required to get at the processor.

The Broadleaf's dual-core Core i3-2120 processor isn't the most powerful and lacks Intel's Turbo Boost technology, so its speed can't be increased from the stock 3.3GHz, but it does at least support Hyper-Threading. It has more than enough performance to cope with Microsoft Office and other standard productivity applications, but anything more processor intensive would benefit from a faster chip.

The processor and the rest of the PC proved more impressive in our energy consumption tests and the Broadleaf used an extremely frugal 20W when sitting idling and 71W when running our most demanding benchmark, which is a lot less than some PCs draw when doing nothing at all.

The rest of the Broadleaf's specification is relatively modest, too. It comes with the lesser of Intel's two integrated graphics card options, the HD 2000, and this scored just 23fps in our low-quality 3D test. That's enough to cope with 1080p video playback, but a more powerful graphics card will be needed if lots of photo or video editing is on the cards and a half-height one at that.

Similarly, while the 80GB SSD is adequate for Windows 7 and a handful of the usual productivity applications, it's a little on the small side for more serious work and we'd also like to have seen onboard Wi-Fi, rather than just a Gigabit Ethernet port.