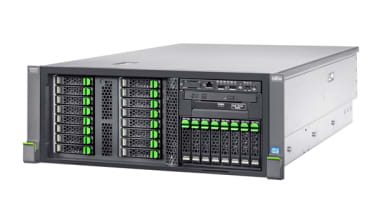 The Primergy RX350 S7 scores highly in the storage department, with room for three eight-drive hot-swap SFF bays on its front panel. This is one of Fujitsu's modular features and each bay is separately connected to an internal SAS expander board that can be brought into play as required. Alternatively, the server also supports up to 12 LFF drives, but either way, it can use SSDs, SAS 2, near-line SAS and SATA III drives. 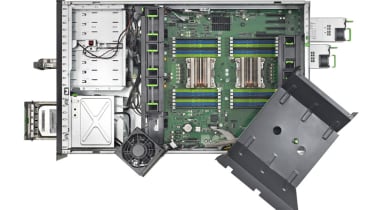 Expansion potential is high as the RX350 S7 has ten PCI-e Gen3 slots and supports up to four hot-plug power supplies.

Three RAID cards are available and the review system came with Fujitsu's 6G SAS card. This can manage mirrors, stripes, RAID-5 and -6 arrays, has 512MB of cache and can be upgraded with a battery-backup pack. There's also a version with 1GB of cache and although we can't see what use it would be in this server, you can go for a cheaper card that only supports mirrors and stripes.

Either way, the RAID card sits in a dedicated PCI-e Gen3 slot near the front of the server and is cabled directly to the SAS expander board. This means that as new drive bays are available as soon as they are brought online, with no requirements for additional RAID cards.

The Primergy RX350 S7's internal layout is very tidy, with plenty of access afforded to all main components. The SAS expander board is easily reached behind the drive bays and further back is a bank of four large cooling fans. These are individually hot-swappable, but the entire assembly can also be removed just by releasing a couple of clips at each end. 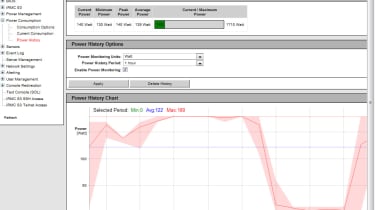 Overall system power usage can be monitored from the web interface and it also provides historical graphs for up to a year.

The processors sit in the centre of the motherboard and are topped with large passive heatsinks. Two more hot-swap cooling fans sit behind, but even with the amount of air being moved around, we found the Primergy RX350 S7 to be remarkably quiet.

The four banks of six DIMM slots support up to 768GB of RAM. Fujitsu offers standard and low-voltage DIMM modules, but only eight modules of cheaper UDIMM modules can be used per CPU.