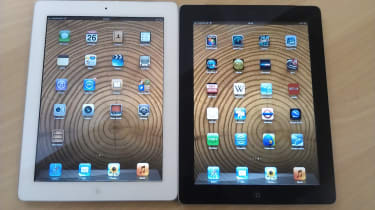 Internet and Connectivity iPad 3 is superfast

Both devices can be used on the move to browse the web and access corporate e-mail. Users are primarily going to be browsing the web via the default Safari web browser, but it is possible to download third party apps such as Skyfire and the Opera Mini. The lack of Adobe Flash content may irk some users as you still cannot view video content from a host of popular sites such as BBC Sport.

The iPad 3 is able to load pages faster than its predecessor with the Sunspider benchmark clocking a rending time of 1790m/s compared to 1818m/s for the iPad 2. Over a Wi-Fi connection the difference in loading times is negligible, but it's a different story when using mobile networks.

Our Vodafone supplied iPad 2 came with 3G connectivity and the iPad 3 featured LTE capabilities, although users in the UK are not yet able to take full advantage of this.

Using the Speedtest benchmark and with four bars of signal the iPad 2 offered average mobile download speeds of 0.91Mbps, with a maximum of 1.67Mbps. This was blown out of the water by the iPad 3, which offered up an average of 4.8Mbps and a maximum speed of just over 6Mbps during testing, which is faster than some fixed-wired home broadband connections.

Of course this high-speed is not available everywhere, but in inner city areas it is extremely useful to have a fast connection to stream multimedia content.

Winner iPad 3 - If mobile internet is essential to you then the the third generation tablet is the definitive choice.

Software iOS 5.1 for both

Both the iPads run on iOS 5.1 so there is little to separate them from a software stand-point.

A feature that is available exclusively to iPad 3 users is voice recognition. This allows users to dictate notes, emails, messages as well as tweets. As with most dictation apps, the accuracy of this varies and we found that no matter how slowly we spoke there were invariably mistakes when dictating short sentences let alone paragraphs.

It is highly unlikely that business users are going to be using this feature to dictate confidential or personal emails in public environments such as the train. At present it is a novelty feature that is most likely to be used by people working from home or by those who have a private office.

Winner - Draw Both have the same software. Although the iPad 3 has voice dictation, it is unlikely to be used very often.