Hard disk drives have been doing the rounds for decades. It is nothing short of a miracle that manufacturers have been mass producing devices consisting of multiple platters spinning at up to 15,000 RPM with no noticeable faults.

However, solid-state drives (SSDs) are firmly established as the storage medium that will replace traditional spinning disks.

In the last five years, the price of SSDs have reduced to the point where they are now a viable proposition for consumers and enterprise users.

As the number of hard drive manufacturers dwindle, a gaggle of SSD vendors are lining up to take a chunk of the growing market. Established vendors such as Intel, Western Digital, Samsung and Kingston are going up against relative newcomers in the shape of ADATA, Micron, OCZ and Corsair.

Of course not all SSDs are the same and IT Pro is on hand to give a rundown of the 10 key features to look out for before making a purchase:

You shouldn't simply pick an SSD based on the amount of data that will be stored. SSD performance is typically measured in input/output operations per second (IOPS) and read/write bandwidth in MB/sec. Much like hard drives, these figures are affected by the capacity. Due to aggregation of bandwidth and the physical number of NAND chips increasing with capacity, performance and in particular IOPS increases with capacity.

Currently, SSDs storage ranges from 64GB all the way up to 1TB, with specialist vendors offering multi-terabyte products. Going beyond 256GB sees very steep increase in price per gigabyte. SSDs with capacities between 128GB and 256GB offer a good balance of price and performance. 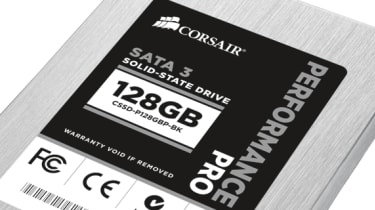 Due to SSDs not having platters, drive manufacturers have managed to attain considerable improvements in physical storage density. The vast majority of SSDs on the market are in the 2.5in format. This means that they will fit into most laptops. A 'drive adaptor' can also be used to fit an SSD into a 3.5in drive bay.

Desktop users can also stack two 2.5in SSDs in a single 3.5in drive bay, allowing for an improvement in drive density without the need for a bigger case.

Certain enterprise orientated SSDs, such as OCZ's VeloDrive have add-in boards that plug into PCI-Express connectors. Such drives carry a significant price premium, but feature multiple SSD controllers to make use of the increased bandwidth of the PCI-Express interface.