Combining multiple storage devices to appear as one is a process known as redundant array of independent disks (RAID). This has been used to introduce fault tolerance and/or increase performance of hard drives. However with SSDs, RAID can have a crippling effect.

The problems with setting up RAID on SSDs come from TRIM command support that uses a wear levelling algorithm to increases the useful life of SSDs. When SSDs are configured in RAID, the majority of SSD controllers are unable to support the TRIM command. This results in significant performance degradation over time. Although fault tolerance may be improved, the harsh drop in performance over time means it is not currently advisable to use SSDs in any existing RAID configurations. 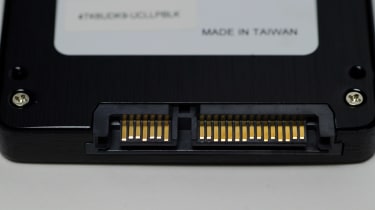 SSDs use the same external interfaces as hard drives, with Serial ATA being the most common. Up until last year, SATA II, which has a maximum bandwidth of 3Gb/sec was common and deemed adequate for hard drives. With SSDs able to saturate the interface, there has been a push towards SATA III, with a 6Gb/sec bandwidth, offering a theoretical maximum bandwidth of 768MB/sec.

It is advisable to go for a SATA III SSD as a means of future-proofing, even if the current system only supports SATA II. The connectors are identical and SATA III drives are backward compatible with SATA II, with a motherboard upgrade or a relatively inexpensive after market SATA III card can provide a performance boost in the future.

Other interface options include PCI-Express, with OCZ and FusionIO popularising the interface for enterprise orientated SSDs. PCI-Express has considerably higher bandwidth when compared to SATA III, with a second generation PCI-Express interface having a maximum bandwidth of 8GB/sec - close to 11 times the bandwidth of SATA III.

However, PCI-Express SSDs have significantly lower bandwidth than the interface's maximum and given the price difference over SATA III units, all but the most demanding applications can make PCI-Express SSDs good value for money.