Although SSD capacities have increased in the past two years, enterprise users may need to consider deploying a storage hierarchy - a setup that consists of both SSDs and traditional hard drives to achieve value for money.

In desktops and workstations SSDs can act as fast 'scratch' drives. This is where users store the operating system and programs on an SSD to achieve low boot times and snappy application loading times. To store media such as videos and images, traditional hard drives can be used where price per gigabyte is significantly lower than SSDs.

Although SSDs have significantly higher performance than hard drives, the sequential transfer rates afforded by high capacity hard drives are more than adequate to stream media.

Even in server environments SSDs can be used to cache popular data with hard drives providing wider storage needs of an organisation. SSDs have been embraced by enterprise storage vendors such as EMC and NetApp to provide hybrid storage area networks that consist of both SSDs and hard drives. 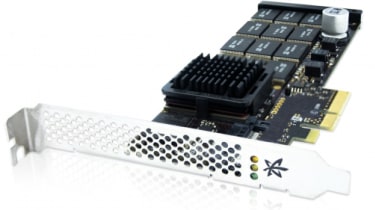 In the enterprise, SSDs can be used as a surgical tool to maximise the bang for your buck. In the same way that a storage hierarchy can effectively use SSDs to speed up parts of a larger data library, doing some basic workload analysis can allow companies to pinpoint SSD deployment for particular use cases.

Those who have upgraded to SSDs often wax lyrical about the improvement in responsiveness. This vague statement is really a reference to what is often an order of magnitude increase in IOPS over hard drives. IOPS as a performance metric is a combination of latency and the SSD controller's job scheduling capabilities, effectively the higher this number is, the more read/write operations can be done in a second.

If a workload is reading or writing data very often, for instance, if it is being used as an operating system's swap drive or a database file store, then IOPS has a greater effect on overall performance than read/write bandwidth. Manufacturers like to mention headline grabbing read/write bandwidths, but only workload analysis can provide you with an answer as to whether you actually read or write 400MB files very often.

The difference between read/write bandwidths and IOPS is an important one because very few workloads read or write very large single files, meaning a purchaser making a buying decision based on sequential bandwidth figures could well be disappointed.

The key is to understand how your workload deals with data, a task that may seem tedious but can reap significant performance and financial rewards.