Something big is happening in the world of web in China. Mike Jennings takes alook at the potential of Tencent. 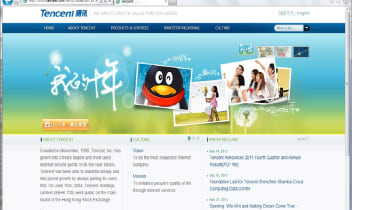 Tencent might not be too well-known outside of its native China, but it's clearly going to use its clout as one of the world's biggest web firms to expand beyond the Great Wall.

Tencent founded in November 1998 - compared to others;

QQ IM, one of Tencent's key products, boasted 721 million users at the end of 2011 - with a concurrent people of 145.4 million users - which makes it the world's largest online community;

Tencent has research campuses in Beijing, Shanghai and Shenzhen, and more than 50% of its employees work in research and development;

Tencent began to build a new cloud computing centre in Shenzhen in December 2011 - a centre the firm says is the "largest in South China" and will serve "hundreds of millions" of users;

March 2012: Tencent launches platform for targeted advertising in a similar vein to Facebook.

Heng reckons that businesses would be silly to ignore Tencent's potential: "its revenue is growing by almost 50 per cent year-on-year, and it has deep pockets to acquire and partner with [companies] in local markets".

That might worry the likes of Google, Yahoo and eBay, but Tencent's need for local knowledge could prove attractive for smaller companies with specialist expertise. The relatively unique culture of a country like the UK, for instance, could prove to be a tricky nut to crack for Tencent, which has done little outside China - so if you're running a firm with British expertise in search, advertising, online gaming or even mobile, then you're likely a valuable commodity.

If you're working for a larger web firm, though, then the outlook is a little murkier: you could be in Tencent's sights. Its global expansion isn't clear cut, by any means, but its desire for local knowledge, deep cash reserves and already-huge user base give it several key advantages.