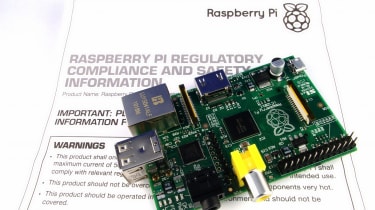 Overclocking the Raspberry Pi is ill-advised as it is a mobile phone chip. We were anxious to see how much overhead the Broadcom BCM2835 has, so we started playing with config.txt.

The config.txt file, located on the boot partition of the SD card, takes the place of the traditional BIOS. In it, you can specify various configuration options, which the SoC should pay attention to at power on. The primary use is to adjust overscan settings when using the composite video output; it also allows you to overclock and overvolt the memory, CPU and GPU. 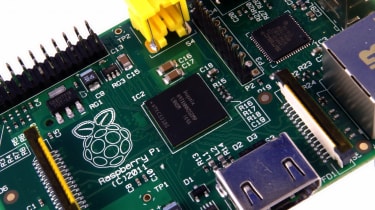 We managed to overclock the Pi to 900MHz

Bricking the Raspberry Pi by overclocking is a possibility, so users should proceed with caution. Even attempting to do so sets a fuse within the SoC, which means your warranty is toast - even if the device isn't. With Pis in such short supply, we'd recommend waiting until it's possible to buy a replacement before trying this yourself.

We started by increasing the core CPU clock from 700MHz to 800MHz and boosted the RAM clock to 420MHz from 400MHz. The SysBench benchmark reported a drop from 106.72ms per request to 93.07ms - proving the synthetic SysBench CPU test scales in a linear fashion.

Going a step further, we cranked up the system to 900MHz while boosting RAM to 440MHz - dangerous levels for a chip with little overhead. Nevertheless, the system booted fine and the benchmark dropped to 81.93ms.

At all times, the BCM2835 remained lukewarm to the touch and we were fairly disappointed when our attempt to break the 1GHz barrier failed miserably. At 1GHz, the system refused to boot altogether.

The overclockability of individual Pis varies to a staggering degree, so it appears we were lucky to hit 900MHz. Other users have reported 800MHz as the hard limit for their boards. Whether there are any systems out there which can hit 1GHz with a bit of a voltage poke remains to be seen.