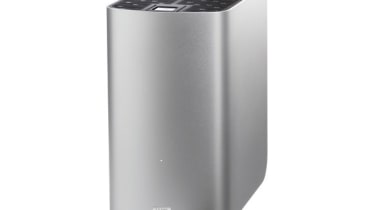 Thunderbolt has had a slow start in life, despite being championed by Apple. After starting off as Intel's Light Peak, the high-speed data transfer technology has only appeared on a couple of Apple laptops and a handful of peripherals, including Western Digital's MyBook Thunderbolt Duo.

It's easy to see why Apple is pushing the Thunderbolt interface and less obvious why other companies have not started rolling it out.

Thunderbolt combines technology from PCI Express and DisplayPort connectors into a cable that's longer and cheaper than most of its rivals. Each port can work individually or as part of a group so up to seven Thunderbolt devices can be "daisy-chained" together.

Current cables don't make full use of the technology, however. To cut down on costs they're made from copper rather than the more expensive optical fibres originally proposed. This adversely affects the performance, which is seen with the MyBook.

Western Digital makes full use of the interface by offering a pair of Thunderbolt ports on the rear. Beside is the AC adapter connection. The two 2TB hard disks can be arranged in either RAID 0 or 1. The former stripes the data for improved speed, while the latter mirrors any stored data for added security, albeit with half the capacity on offer.

The firm's decision to use two Caviar Green hard disks to create the 4TB capacity on the MyBook Thunderbolt Duo appears to negate many of the advantages of Thunderbolt. 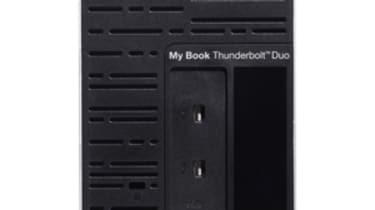 There are two Thunderbolt ports located on the back

The drives are eco-friendly and we've no complaints about the capacity or the 64MB cache afforded to each one. But their spindle speed means they can't match the sort of pace offered by traditional hard disks, which typically run at 7,200rpm.

Western Digital has calibrated each Caviar Green drive to run at the most efficient point between 5,400rpm and 7,200rpm, so you're never quite sure of the exact speed of the drive just that it won't be up to speed with standard disks.

Our file transfer benchmarks evaluated large and small file writing and reading, with a single 1.5GB file used for the former benchmarks and 15,000 100KB files used for the latter tests. The drive was configured in RAID 0, which is typically faster than RAID 1.

In our large file write test, the MyBook scored 103.08MB/s half the speed we'd expect from a typical internal hard disk. This was also slower than the 112MB/s write speed of a RAID 0, two-drive LaCie USB 3, which is rather dated.

There was little joy in our large file read test, either, with the Western Digital's 101.05MB/s result falling well short of the 141MB/s achieved by the USB 3-equipped LaCie.