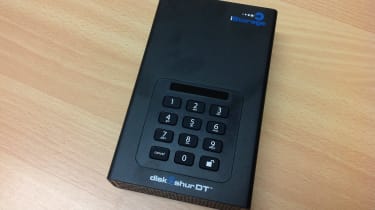 One area where the iStorage device provides mixed results is speed. Its large file write result of 140.9MB/s is decent. The drive read large files at a fantastic 320MB/s, putting it up there with the best internal hard disks. It was also faster than the Western Digital MyBook Thunderbolt Duo, which boasted a next-generation Thunderbolt interface, but only recorded scores of 103.08MB/s and 101.05MB/s in the same tests.

When working with small files the iStorage faltered badly. It wrote our group of small files at 38.6MB/s, and read them at a marginally worse 36.7MB/s. This is especially poor when compared to the Western Digital, which coped well with small files. In the same tests, the Thunderbolt device scored 71.09MB/s in the small file write tests but 29.1MB/s.

In our AS SSD benchmark tests the iStorage delivered a set of middling scores: 128.37MB/s in the sequential file writing benchmark, and 126.08MB/s in the equivalent file reading test. This is half the speed we'd expect from a new 7,200rpm internal hard disk.

The 3TB model we've reviewed here will cost a hefty 299. Chop away those security features, and the same amount of external storage can be had for much less cash. The Western Digital MyBook Essential, which has the same capacity and also uses USB 3.0 can be picked up for 120.

The iStorage is available in 1TB and 2TB versions. These cost 194 and 215 respectively. This makes the latter drive better value, but if you can do without its security features the same amount of storage can be found much cheaper - 2TB external hard disks cost less than 100.

The iStorage diskAshur DT isn't designed to be cheap or fast, it's been built for security, from its PIN entry system and military-grade encryption to its rock-solid, sensible exterior. If those are your primary concerns when looking for external storage, this is a worthwhile - if expensive - investment.

Pricey and slow, the iStorage diskAshur DT doesn't look like much of a contender when it comes to external storage, but this unique device has plenty going for it. A PIN number system that locks out anyone trying to get at your data, numerous other security features, and build quality that few drives can match. It's expensive, but if security is important, it's a price worth paying.